Can You Fit a Giant LEGO Roller Coaster in Your Living Room?

Rollercoasters are fun. LEGOs are also fun. Therefore, by the unspoken rule of cool, putting the two together only makes the end result much cooler.

A few months ago, Chris Burton of Half-Asleep Chris took 10 LEGO roller coaster sets with the sole purpose of making a single, giant roller coaster. After opening 423 plastic bags and sorting the 37,116 LEGOs found inside, he got to the task of turning his living room into a LEGO amusement park ride. 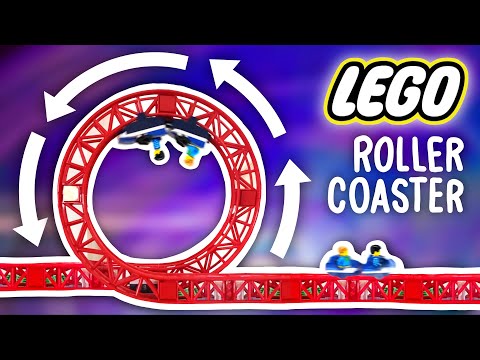 The initial goals were to make the roller coaster as high as possible, have at least one loop, and make it using only LEGOs. But upon hitting the halfway point towards the ceiling, Chris realized making the supports out of LEGO just wouldn’t work. The structure was already wobbly, and adding more LEGOs would only be asking it to topple over. To top it off, he had nowhere near enough plastic pieces to complete the supports of the roller coaster.

Seeing as there was no way he would give up creating the tallest LEGO roller coaster possible, he made a different compromise. The roller coaster tracks and the attractions would still be made out of LEGO, but the supports holding everything together would be made out of wood. So after some good, old-fashioned carpentry, Chris had himself a sturdy wooden support for his track.

You can see Chris split the upward track into two slopes. This would make the track less prone to snapping and make the cart less likely to fall backward. He also installed a motor at the halfway point to aid the cart with the rest of its upward journey.

With the uphill track finished, Chris then worked on the descending track. This part consists of a straight vertical drop made from modified track pieces that are placed on their side. And to hold the all pieces together, Chris used LEGOs and cable ties.

The vertical drop was made much shorter than intended, as the cart would derail on a longer track by picking up too much speed. And if everything goes well, the cart would go through an enclosure fitted with a smoke machine.

Getting Creative With the Tracks

To make things more exciting, Chris created a number of different track variations for the cart to run through. There’s a bumpy section, a straight track section, another bumpy section, lots of twists and turns, a small loop, and a big loop. He didn’t fully abandon his LEGO support idea, of course, as he used some of the pieces to prop up the smaller parts of the track.

As this isn’t an official LEGO track, it is not expected to work 100% of the time. According to Chris, the cart can sometimes get stuck in the small loop about 1 in 4 times. The weight of the GoPro attached to the cart can also contribute to the derailing of the cart. It’s going to take just the right try for it to work properly but thankfully, Chris managed to get a perfect run on camera.

After some good lighting and decorating, the giant LEGO roller coaster was ready to go. To put things in perspective, if the average human were to scale to a LEGO minifigure, this coaster would be 94.3 meters tall (or roughly 309 feet).

The first-person view from the GoPro’s perspective is definitely a trip and I wouldn’t recommend this ride to anyone who can’t handle flashing lights. The project was definitely a fun built to work on for Chris, even though it was by far his most expensive one.

To see more of Chris’s interesting builds and projects, be sure to check out his YouTube channel, Half-Asleep Chris.

Fold Your Luggage Down To Side With the LITO Suitcase