Buble by French company Dreemzzbox is a portable projector for kids which plays screen-free animations on the ceiling. This projector took its inspiration from planetariums and dome theaters, allowing kids to lie down and fall asleep while watching some mind-numbing shows. 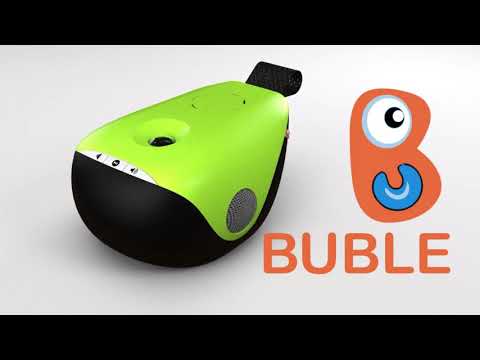 Instead of playing Netflix or Disney+, Buble uses its in-house animations via Bublers. They are PVC plastic with built-in NFC smart chips. Different Bublers store different animations which can play when placed on top of the Buble projector. While Buble currently has animations only available in French and English, the creators consider incorporating other languages.

And because this is the 21st century, you can bet Buble comes with its app. With it, parents can supervise what their kids are watching on the projector and track their interests. It’s an excellent concept, but I hope it doesn’t encourage parents to watch over everything their child watches as they get older.

I’ve talked about the NFC chips and the Bublers at length, but the projector itself is also something to talk about.

The Buble has an LED projector that plays shows at an 854×480 resolution with 150 lumens brightness, and the audio comes out through two 3 watt speakers. It even has built-in Wi-Fi and Bluetooth connectivity, which allows you to access it via the app on your phone.

While those specs aren’t exactly stellar, what will catch your attention is the Buble’s unique shape. It takes its design from a whale’s body – with a chunky front body curving down to the strap at the back. The Buble even has a two-split color scheme reminiscent of a killer whale.

The team at Dreemzzbox came up with multiple designs – starting with a seashell, then a starfish, to an octopus shape. In the end, however, the whale shape prevails due to its appeal to its target market: the kids.

Buble comes at a rather steep $197 (and that’s only for early birds) price tag. But that doesn’t stop parents from wanting something special for their kids. It currently has total funding of US$37,050, which is more than halfway towards its US$56,490 goal. If you want to join the Buble project, better check its Kickstarter page.