Irish poet Oscar Wilde once said that “life imitates art more than art imitates life.” In layman’s terms, it means that human beings tend to look at nature through the eyes of an artist by way of their art rather than see things as they are. It paints artists in a somewhat powerful position, making them the seers of the world and the rest of humanity as the viewers.

Artist Steven Richter, on the other hand, took this saying a little more literally. About a year ago, he took the concept of egotism and face reveal to new heights. He created his own half-body and half-size sculpture, making a quarter-size model of himself. 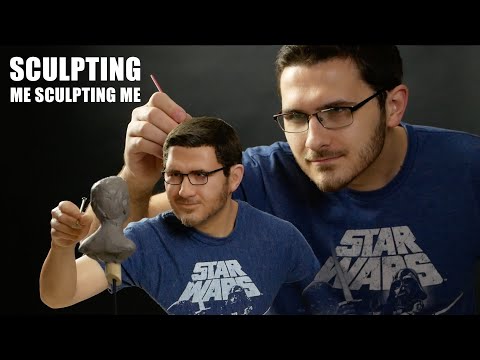 Steven first began his journey by making a rough sculpt of his half-size bust in clay. This project required him to focus on its facial features – including the eyes, ears, nose, and mouth. Once the clay dried, he poured layers of silicone mixture over the sculpture to create a mold.

He left the silicone to dry for a while before adding a layer of what I assume is papier mâché over it.

Before Steven could finish the silicone bust, he first completed his clay sculpture’s right arm.

Unlike the rest of the sculpture, the right arm has a frame made of wire to keep it upright. Steven built the arm around this frame and took extra care to put in the finer details. Some of the things he did were the positioning of the fingers and the wrinkles on the skin.

Like the bust before it, Steven poured layers of silicone over the right arm. He performed it before encasing the part inside a layer of papier mâché.

Bringing a Plastic Bust to Life

By pouring liquid plastic on the inside of the silicone molds, Steven created the bust for his final sculpture.

This final canvas was painted and fitted with eyes, hair (including facial hair and eyebrows), and a pair of glasses frames. To make the bust look even more authentic, Steven went through the trouble of screen printing and sewing a smaller version of his Star Wars t-shirt.

While the half-size bust is chock-full of details, the quarter-size figure the bigger one is supposed to be working on appears like a work in progress.

Still, Steven puts just enough effort to make the tiny bust look like it’s in the middle of the sculpture process. He used liquid plastic with a grey tinge to make the figure look like clay and painted it to give it that extra layer of detail.

Time To Bring Everyone Together

Place the quarter-size bust in front of the half-size statue and place full-size Steven behind everything else, and you’ll be hard-pressed to determine who is making whom. Thanks to the amount of detail Steven put into the busts, they look like him just enough to make things creepy.

This project is one heck of a face reveal, as Steven Richter only previously made busts of other famous icons instead of himself. If you’d like to see those more well-known faces, be sure to check out Steven’s YouTube channel.