Making something on a 3D printer these days is easy. You upload the files to your computer, add in the filament, and you have your brand spanking new item within a couple of hours.

Casting metal, on the other hand, is much more complicated. But Seth Robinson of Robinson Foundry could marry the two methods to create double-threaded bolts.

For those who don’t follow his channel, Seth 3D-printed some double-threaded bolts and cast them in metal before. The first cast was a suitable proof of concept, but the bolts didn’t have edges to fit an oversized wrench. 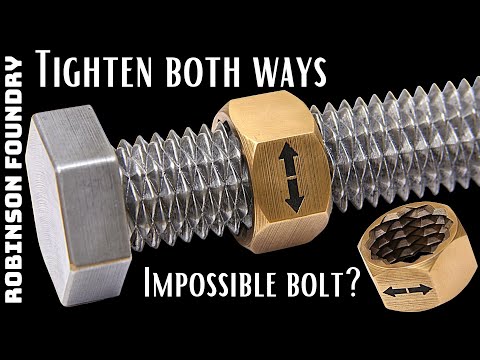 This second attempt used a design that looked more like a traditional bolt. Seth started gluing on extra attachments after printing out the bolt models using PLA filament, making it possible for him to make a casting mold.

These printed parts are placed inside a liquid ceramic and given an even coating on all sides to make the perfect metal cast. After the first two coats, the following seven coats were succeeded by dusting silica sand to help harden the mold.

After the fourth coat, Seth wrapped a layer of steel wire around his mold. This process would prevent large cracks from emerging and potentially breaking the finished product. As an added measure, he sprinkled on some fiberglass shards to help strengthen the ceramic.

Seth let the molds dry for a few days before popping them in his kiln at 500°F (260°C) to melt away the 3D-printed plastic. He took a momentary pause to remove the plastic before popping the ceramic molds back in his kiln and cranking the temperature up to 1500°F (815°C). This step would not only harden the molds but vitrify them to a point where they can contain molten metal.

The following day brought good results, as the molds were solid without any large cracks. After pre-heating the molds to 1000°F (537°C), it was the perfect time to melt the metal and start pouring it in.

Seth made two molds for two bolts: the first one cast in copper and another in bronze. Using scrap metal from his previous projects, he poured in his molten concoctions and let them settle for a few hours.

Cracking open the molds unveiled some finely casted metal. Nearly all the metal was perfectly shaped to the mold, requiring Seth to cut off only some of the excess with the help of a file and a disk sander.

Some final brushing and polishing later, and the nuts and bolts are ready to go. You’d be hard-pressed to find a hole that would fit these particular pieces, but they make for a very satisfying turn. You can turn the nuts either left or right (as their namesake implies), and they will fall right into the bolts.

Have a Look at This LEGO Technic Gift Wrapping Factory