I’m all for kinetic sculptures that look like they could disembowel you, devour you, the move your remains through their undulating, kineticly cool structure. U-Ram Choe who is know for amazing metal work mixed with an array of glass, coils, resin, electronic bits and movement has a new sculpture showing in New York at the Asia Society Museum until December 31, 2011. If you happen through the Big Apple, you’ll want to see it. If you don’t, you’ll want to see this mesmerizing video.

Choe was inspired by Shiva as Lord of the Dance (Shiva Nataraja) from Asia Society’s Mr. and Mrs. John D. Rockefeller 3rd Collection. This late tenth-century sculpture in turn gave birth to Choe’s own mythological tale of the guardians of two imaginary worlds. He calls them Custos Cavum, or “guardian of the hole” in Latin. This creature protects the flow of communication between the two realms that assures mutual respect. 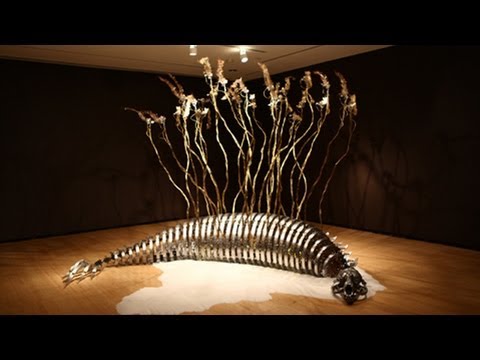