When it comes to morning routines, few things can surpass digging into a golden and fluffy waffle soaked in maple syrup to get the day started right. For Brooklyn designer Chris Dimino, this love for the holy grail of breakfast cuisine led to the creation of one of the most ingenious kitchen tools we’ve ever seen: The Keyboard Waffle Iron.

Designed from “the waffle-out”, the Keyboard Waffle Iron (or KPI for short) features a unique wide format plate that molds delicious and fluffy Belgian-style waffles in the shape of a computer keyboard (fun fact: the design was actually based on a Smith-Corona typewriter).

Dimino first sought funding for the waffle iron on Kickstarter in the Winter of 2014. After raising nearly $70,000, Dimino was able to realize his vision for making a better waffle and put the iron into production. Now, those who might have missed out on the Kickstarter campaign’s early backer rewards can now get in on the [Shift+Breakfast] action ahead of the upcoming holiday season. 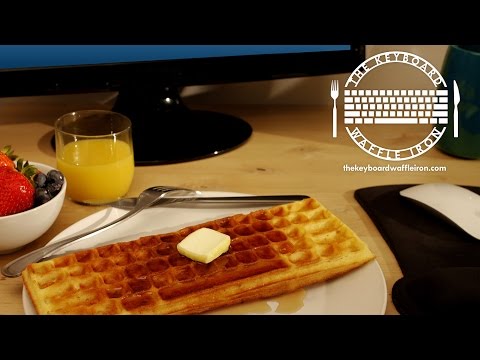 Thanks to its analog “wireless” design, the iron can be used wherever there’s a heat source – including the kitchen stove, outdoor grills and of course, campfires. For those feeling particularly adventurous, Dimino has even created a KPI Recipe Book for upgrading your creative cooking skills.

“With the recipe book, you’ll have the power to make amazing waffles that will reboot your spirit and import a gigabyte of flavors to your body’s hard drive,” explains Dimino. “Included are classic, paleo, vegan, and gluten-free recipes. Step out of “safe mode” with recipes for hash browns, paninis, brownies, and more.”

The die-cast aluminum Keyboard Waffle Iron is currently available for $85 over at TheKeyboardWaffleIron.com