It’s a big week for Solid Edge users and the SiemensPLM Solid Edge crew this week. They’re holding their second, purely Solid Edge event and it’s going down in the annals of CAD Industry event history. Solid Edge University came about as a bit of a revolt by the Solid Edge users (and staff) by not being fairly represented at the larger SiemensPLM conference (PLM World) and, in my opinion, is long overdue. There are a few highlights from this year’s show. A few highlights that show exactly why Solid Edge is building steam and also, why they needed to break off and have their own user event.

Coming in July of 2012, Solid Edge ST5 will add over 1,300 customer requests and enhancements. This is no small update and it matches the size, scale and growing community of the Solid Edge user base.

Multibody modeling is added that adds capabilities you thought you may have had with Synchronous Technology (ST) before, but this adds a whole new level of modeling to the SOlid Edge environment, bringing it up to what other 3D software is capable of, then proceeds to surpass it with the benefits of ST – Fence Dragging, Live Rules – and then split, saved out or merged with other bodies.

Drafting gets some additional updates with Wire Harness design built into ST5 and a lot more automation of drawing views and annotation. There are more assembly enhancements with Simulation of thermal and mechanical systems, relationships for barrel cams and 3D paths along with the typical new-version claim that larger assemblies can be opened (as I’m sure they can.)

You’ll also be interested to know, from a SolidWorks user perspective, Solid Edge ST3 was interesting. Solid Edge ST5 puts SolidWorks against the ropes, so to speak. It’s simply a great alternative now with the added modeling capabilities and, particularly, with the mystery that surrounds the future of the SolidWorks software. (Perhaps the SolidWorks users/staff need to have a revolt? Another post for another time.)

So, you cna read the full ST5 press release, or even better check out the Solid Edge ST5 review on Develop3D. Here’s a brief corporate-y video of the features you’ll find in ST5. 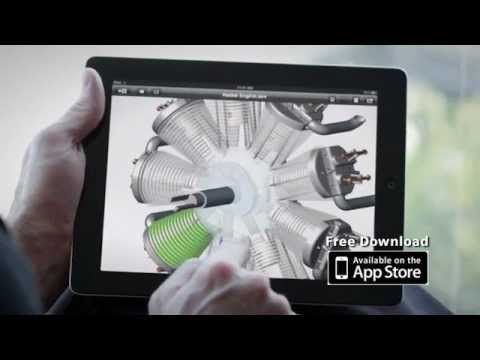 Also announced, and release to the public as well, is the new Solid Edge iPad view for pure 3D model spinning excitement. No longer will you have to look at static images in the line at the coffee shop. Nope, instead people will be curious of the strange magic you’ve harnessed. It’s the natural progression of (some) CAD software – an app to view the models. The main features you have here are:

So much more needs to be done for 3D file viewers on mobile deveices, but it’s a nice first step. The viewer is absolutely free and can be downloaded now from iTunes.

Depending on when you see this, you can get the conference play-by-play or a recap of all that’s going down at SEU with the Twitter #SEU12 hastag. Our congrats to the SE team for putting together a great event. It will definitely be one for PLMConx event staff to model and one that will undoubtedly grow larger in the future.

The Art of Curve Folding and Robot Manufacturing