I walked into Vancouver Hackerspace the other day to hang out, There, in all of it’s colorful, tabletop printing beauty, was a new 3D printer and a smiling man named Brad (aka Sublime) giving a little demo on his Tantillus 3D Printer. It’s a small machine that packs a punch. The details were marvellous for such a small FDM printer, better than many I’ve seen (and I’ve seen a LOT). The clear acrylic plastic case, sheer speed and detailed prints are a must see. Here’s a look.

I was talking with Brad and I asked him what separates the Tantillus from other RepRap derived machines. “The Tantillus’s unique cable drive mechanism gives unprecedented print quality from an FFF (Fused Filament Fabrication) printer. It’s low moving mass allows it to accelerate at incredible speeds which reduces build times and improves surface finish.” No doubt – I haven’t heard of too many examples of 10 micron printing out there. One of his machines integrates the spool into the case, a touch I appreciated greatly as I’m always untangling the plastic filaments. And the speed? Well, you’ll have to see…

100 micron layers? Not a problem. (He’s gotten 10 microns – guess which picture at the bottom) 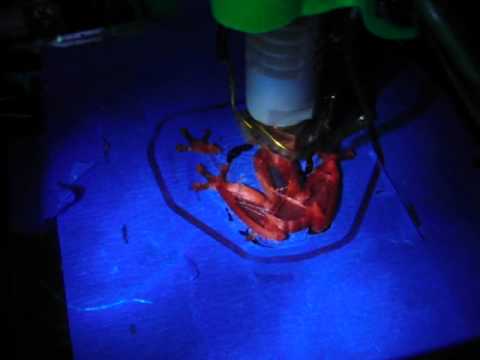 The Tantilus is on Indiegogo right now with your opportunity to snag one ending Thursday, June 14th. And what’s this? Only $850 for a kit? Get out of here! That’s craziness. So if you’re looking for a great 3D Printer, buy a Tantilus. DO IT. This is one of the highest quality printers I’ve seen at that price.