I used to keep a watch on every sub-$700 tablet coming to the market. I was looking for a magical combination of specs that would make it the perfect budget Cintiq. After CES 2011’s disappointing announcements, the closest there was to what I wanted was the 7″ HTC Flyer. So, having found the best capacitive stylus out there, I bought an iPad and stopped trying to keep up with the endless parade of new Android Tablets. SolidSmack reader Avin tipped us off over the weekend to a tablet that—for a couple of reasons—had skated by unnoticed by the tech or designer crowds. The Lenovo ThinkPad Tablet is the closest thing to a Cintiq on the cheap. It’s too bad they have failed to market it that way. Hit the jump for a run down on what makes this tablet special, a video of it being used for drawing, and what keeps me from selling my iPad for one.

Qualifications of a dream tablet

If the perfect tablet existed, it would have:

It seems so simple and, yet, after all the announcements and releases of tablets, none meet the specs. Or even come close, really. I just can’t get over the 7″ size of the Flyer, especially with the single core processor and higher-than iPad starting price.

But wait, you say, I thought Lenovo’s Android Tablet was called the IdeaPad K1? Ah hah! You’d be right. That’s the tablet that they’ve been pushing to the consumer crowd, while on the side, they’re trying to woo the enterprise market with the anonymously named ThinkPad Tablet. The problem is that the ThinkPad is the one that has a stylus.

So here’ s a run-down of the under-touted ThinkPad Tablet:

Seems awfully close to the dream list, eh? So, why is Lenovo not pitching this to designers? Obviously it’s a small enough market segment that people aren’t really thinking about it. Funny, since that market segment combined with education is what kept Apple alive during it’s down years. Ok, enough ranting. Let’s talk about the good. First, some of you may have noticed that I mentioned that Sketchbook Pro now has pressure sensitivity. It took me forever to verify that, but it’s true. They don’t give specifics on their Android Market page except to say that is has an “option for pressure sensitivity.” I was able to find out that any tablet that has an N-trig digitizer will work. That’s the same type used in the HTC Flyer.

After spending way too much time trying to find out specs that Lenovo didn’t really push, I came across this video: 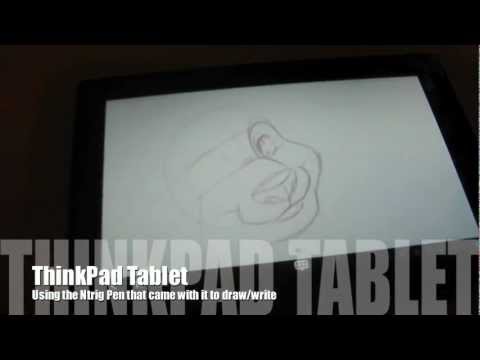 While it doesn’t provide a whole lot of detail, it does give proof that the ThinkPad Tablet does support pressure sensitivity.

If you poke around, you’ll find the ThinkPad Tablet a little less on Amazon

than the MSRP. You’ll have to buy a stylus to go with that version, but at about $40, the two can still come in under the $499 for the base iPad and this thing has connectivity options up the wazoo. Ah, one other cool thing to note is that the tablet has a spot to carry the stylus, a problem that has spawned many a project for the iPad.

I have not used a Lenovo ThinkPad Tablet, but now I’m itching to. If I were looking right now for a tablet for work, I’d snap one of these things up right away. Yeah, I’d love to see way more levels of pressure sensitivity, and it looks a little thick—I know, I’m spoiled—but I’m pretty sure this is as good as it’s going to get for a while if you’re looking to get a Cintiq-esque experience out of a device that cost’s half as much as the Entry level device from Wacom. Designers just aren’t a priority when developing a product. Lucky for us, someone at Lenovo decided that giving luddite executives a pen to handwrite notes was important. If only that same someone had decided to give the thing it’s own name—there are many Lenovo ThinkPad Tablets—and bothered to send word to the designer world.

As for me? Now that I have the iPad and have gotten comfortable with my “dumb” stylus, I will hold onto it for a while. I have been using InkPad, an excellent vector graphics package, a lot more than I would have ever thought and haven’t heard of a comparable app for Android. So inertia is really one of the reasons that I’m sticking with the iPad. And it plays well with my phone.

Do you have a ThinkPad Tablet? We’d love your feedback.