Being able to talk to friends and relatives from far away via Skype or Facetime is all well and good, but it just doesn’t have the physical interaction you get when the person is actually beside you. Combined with the first few minutes wasted shouting to see if the person can hear you over the laptop and you realize you’re fussing more over technology than having an actual conversation.

Now I’m not saying FUSION (short for Full Body Surrogacy for Collaborative Communication) is the newest way to talk to someone online, but the way it communicates is quite unique—and it just may change the way designers and engineers from around the world share ideas and give presentations. 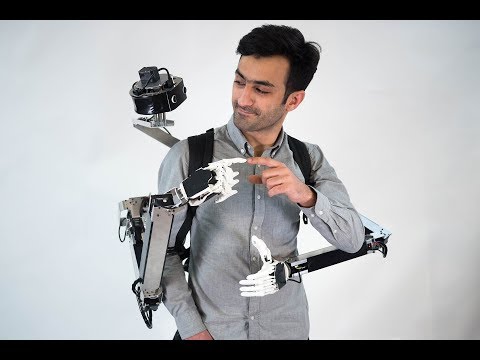 Created by MHD Yamen Saraiji, Tomoya Sasaki, Reo Matsumura, Kouta Minamizawa, and Masahiko Inami for the Embodied Media Project of Keio University Graduate School of Media Design, FUSION is a surrogate system which attaches two robotic arms and a set of eyes to a person via a backpack.

Located in backpack are the essentials to power the system: a battery, control units, and the majority of the circuitry is found in this rather large box which you have to lug around.

The box powers the arms and eyes which protrude from the user like the world’s clingiest robotic friend. A three-axis head with a built-in stereo camera lets another person see from your perspective while the anthropomorphic arms allow them to impose their will using a pair of controllers and a headset.

Direct collaboration is the easiest to explain. Using the robotic hand attachments for the arms, a remote operator can pick up and move objects, interact with the environment, and generally be a nuisance to the surrogate wearing the FUSION backpack. This adds an extra pair of arms for the person as well as an extra brain to help out in problem-solving (think of it like those extra arms Doctor Octopus uses whenever he’s tussling with Spider-Man).

Should the surrogate want more guidance when doing complex tasks like changing a lightbulb or learning how to drive stick, enforced body guidance lets the operator “take control” of the surrogate by strapping the metal arms to the other person’s real arms. This gives the operator slight control of the person’s movements, but both people have to communicate effectively since finger control is left to the surrogate’s discretion.

Lastly, for total body control, induced body motion involves pulling the surrogate’s arms past their normal reach to direct them someplace else. It’s precisely how enforced body guidance works, except you’re using the robotic arms to pull your ward along like a child dragging its parent for ice cream.

The FUSION was demonstrated at the SIGGRAPH 2018 Emerging Technologies convention in August. While it isn’t for sale, the possible applications of having a robotic conscience controlling and aiding your every move feels like a more personal (and freaky) way to bond with someone far away from you.

The SparkMaker FHD Is a $500 Multi-Material SLA 3D Printer