Though 3D printing is imperative for many hardware developers, it’s usually the price of the printer that stops a lot of folks from purchasing their own—as opposed to using an office 3D printer or a 3D printing service. After all, a half-decent desktop 3D printer capable of keeping your tolerances tight can cost well over a thousand dollars. 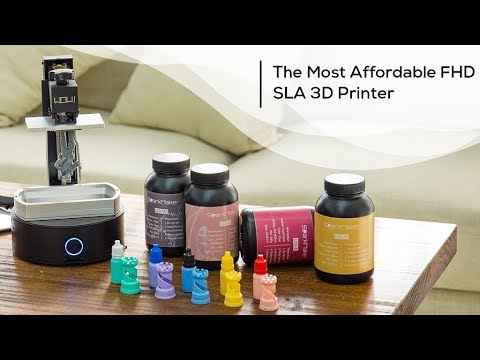 It’s this fine line between affordability and quality of printing that the SparkMaker FHD walks. After its first successful Kickstarter campaign, the SparkMaker FHD is trying to one-up its predecessor by adding a 1080 LCD screen and four new resin types to make printing easier and versatile.

The new SparkMaker has Bluetooth connectivity as well as an SD card slot. This gives you a lot more options when you want to use someone else’s printer or when you’re just too lazy to open your computer. To save even more time, you can use the SparkMaker mobile app to control your prints using your smartphone or tablet.

One of the more significant highlights of the FHD model is the high definition LCD screen. You won’t be watching full-length movies on it, though. The screen is for printing more massive objects up to 61.8 x 110 x 125 mm at a higher quality and speed. The quality of the prints have a 57 μm XY axis resolution and can print as fast as 25mm/hr.

This brings us to the four new resin types. To handle different 3D printing needs, each resin has its own unique characteristics which make it ideal for printing specific types of objects.

LCD-Q is a resin made for printing objects in a variety of different colors. This one has a tensile rate of 5% and a hardness of 80D.

LCD-MG is the hardest of the bunch as it turns rock solid a few minutes after printing, making it ideal for printing more functional parts. It has a tensile rate of 5% and a hardness of 80D.

LCD-G is the clearest resin, allowing for some slick engravings on a resin which won’t turn yellow over time. You’d want to use this when fossilizing small relics or mementos. Having the highest tensile rate of the bunch (25%), this resin has a hardness of 75D.

Lastly, LCD-H is able to stand temperatures of up to 320°C. With a tensile strength of 3% and a hardness of 90D, this is the best resin to use when making a short run of injection molds.

Without the extra resins, the printer alone costs $500. If you already own an old SparkMaker, the company can sell you the extra parts in the form of an upgrade kit which includes a metal tank, the 1080p LCD screen, a mainboard, one metal panel, and one UV backlight. Considering the newer SparkMaker costs $200 more than its predecessor, it might be wise to get these upgrades rather than buy a new 3D printer.

The SparkMaker FHD Kickstarter project already has $308,318 pledged of its $50,000 goal. It might not be the most high-end desktop 3D printer out there, but it’s also not a bad way to start your own foray into 3D printing if sending your STL files away to a service has become a hindrance to your process.