The 3D, Free-Space Modeling Future Created by a Single Person

You may have just shaken the dust of an old set of gloves, slipped into a memory of days gone by. Days spent hitting your brother after hogging all the Nintendo playing action with your new Power Glove. “IT’S MY TURN!” No, not until I beat this dragon… WITH MY FIST!! That’s right. You were the glove…

And the glove isn’t going away. Take for instance the possibilities it possesses for manipulating 3D geometry with your hands. UNLIMITED. Sebastian Pirch is just the guy to prove it too. WIth nothing more than a Kinect, an Arduino and the technological knowhow to tie it into PureData via pduino, he was able to create a very interesting method of modeling in completely open space with nothing but his hands… his hands covered in warm, woolen 3D nabbin’ geometry mittens.

For the modeling, I select things by moving my hands in 3D space. So, for this I fix the skeleton’s hands in front of the camera to have them moving and rotating with the view. this works by multiplying the sceletons world coordinates with the camera matrix. The most demanding part was the multitouch logic that forbids a certain cursor for other objects once one is selected. If you select something and move it around, you don’t want to drag everything else on the way with it. So, there [are] many crooks and hacks to avoid unwanted situations in here. The rest was a piece of cake: for the modeling I made 2D menupoints that switch between the 4 basic operations needed for mesh-modeling: Create Verticle, Create QuadFace, Create TriFace, Move.

A piece of cake, he says. 2D menupoints? puh-lease, my dog makes those in the yard. For real though, this is incredible and a glimpse into the future possibilities of modeling and growing your shoulder girth. Nevertheless, we’ve got to get it off the 2D screen and into the open space. Throw some arduinos at that task. Here’s Sebastian giving the play-by-play as he plays with his creation, creates points, grabs geometry and yes, brings it into another 3D system (3ds Max). 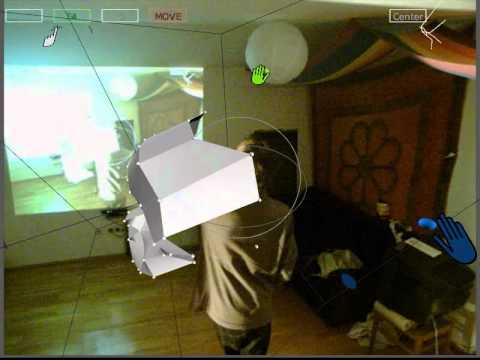 Fab Your Way to Contemporary Design Fame with Shapeways