3D Modeling with Your Hands. Your Shoulders Will Be Huge.

Like you, there’s one thing I’ve always wanted… massive freaking shoulders. That, and a chest cavity deep enough for dips. The first may not be so far off. Leave it to Ethan Rublee and a group of researchers at Temple University’s Computer Fusion Laboratory to become captivated by the possibilities around the hands-free manipulation of the XBOX kinect.

This year, to create a contrast between the gaming technologies, using OpenNI we integrated the XBOX kinect into Play-Doh to track a users hands instead of a physical tool, like the control pen. As part of the presentation, we explain how anaglyphs, stereo tracking as well as the tech behind the Kinect works. The kids find out how their favorite video games work and we trick them into getting interested in science, math and engineering. 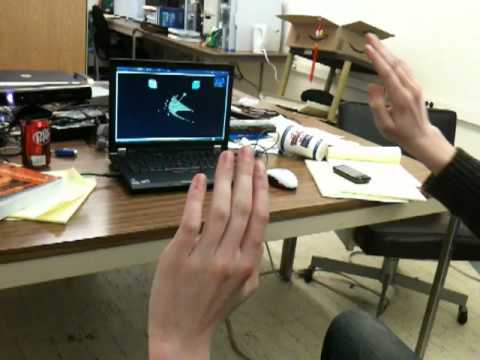 Yes folks, you too can have a desk that is a complete mess while pushing geometry around with your feelers. The technology is called Virtual Play-doh which was adapted from the previous year’s project by Ethan and the research team which utilized some Wiimotes and infra-red LEDs. This year’s version is much cooler and while you may scoff at the possibilities, it definitely shows some potential for 3D moving off a 2D screen.

Kinect News via Charles Culp who already has massive man shoulders that could crush you.

Learn How to Import Your Messy, Messy 3D Data… for Free