One of the biggest strengths of an artist is being able to see the world in a different light and to bring their vision into reality. Painters do it with brushes and a canvas. Musicians do it with instruments. But for a special artist in Korea, his medium of art comes in the form of a 3D filament pen.

Known only by his YouTube channel 3D SANAGO, this artist expresses his art using 3D filament pens. While most of his project are done in the comfort of his own home, he sometimes goes outside to fill out dilapidated public spaces with his art. 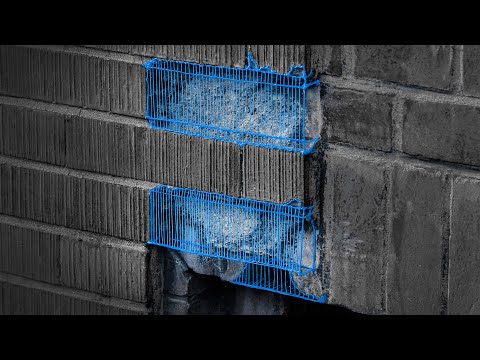 Recently, our artist was commissioned by the city of Daejeon to work his 3D filament magic on a couple of broken segments in an old provincial office. And when I say “old”, I really mean OLD. This building was built back sometime during the Japanese occupation of Korea from 1910-1945. Armed with his iconic orange suitcase filled with his pen, filaments, and… a stuffed giraffe, he gets to work on adding some modern flavor to this ancient building.

The two main segments he works on in this video are a couple of broken bricks located just a few feet above a normal human’s reach. He employs the use of a ladder to get to them and we soon see the use of the stuffed giraffe- it’s for keeping his bottom comfy while he works on the building!

As soon as he’s nice and comfortable, our artist starts filling in the missing segments with his 3D filament pen. Just like his other public “restoration” projects, he traces the outline of the broken segments first. This not only provides a solid base for him to work on, but it allows the filament to stick to the building while it’s still hot (plus, y’ know… adding filament to a flat surface is way easier than suspending it over open-air).

Upon finishing his first attempts at filling out the two spaces, he notices that he really doesn’t like the red color or the way they turned out. He removes these initial fillings and starts anew with some blue filament.

Once the base is complete, he then starts working on adding the suspended lines to his art. As I mentioned earlier, adding filament to open-air is way harder than doing it on a surface since you have to take into consideration some factors like wind and gravity. Thankfully, he has a lot of experience working with 3D filaments and creates a single, crisscrossing line to fill out the open space left by the missing brick.

The second segment is harder as there aren’t any edges on the bottom to work with. To remedy this, our artist employs the aid of a ruler as temporary support. He mentions that filaments also shrink as they cool down, so you have to carefully estimate how much of the material you want to use. To make the filaments stick in the air, he creates a number of bridges that helps support each other and prevent the whole thing from falling out.

He doesn’t really “fix” the broken segments of the building, as a good storm could most likely wash his art away. But the whole point of this project isn’t to repair the building, it’s to showcase how the old and new can coexist harmoniously. With this goal in mind, I’d say he accomplished exactly what he set out to do.

There’s still a lot of work to be done on the building. Hopefully, he comes back to fill out the other broken parts of this old Daejeon provincial office.