Pablo Sobron, PhD gave us a tour of the R&D company, Impossible Sensing, which he founded in St. Louis, Missouri. See the video below for a look inside their lab: 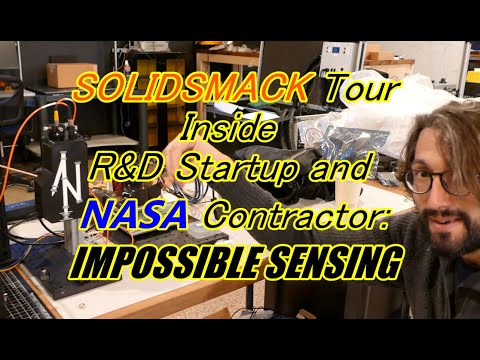 Most of the systems Impossible Sensing builds are to be used in aerospace by NASA. Others are for deep ocean and oil & gas applications.

While Impossible Sensing’s branding refers to their instruments as sensing technology, most of what they do could be more precisely labeled spectroscopy. They’re not making position detectors, or occupancy sensing devices, or temperature and humidity sensors; they detect specific elements and molecules.

Land is cheap in St. Louis, compared to, say, Silicon Valley, so it’s also cheaper to make mistakes there. Impossible Sensing may be an R&D lab, and even develops much of its technology according to hyper-practical NASA methodologies, but it’s also a startup. The day-to-day operations still need to be lean and adaptable as it figures itself out. Sobron also has some academic roots there with Washington University down the street. Plus, he’s just really fond of the city.

What the Heck Are Spectrometers?

There are many types of spectrometers, but the basic concept is the same for all. In a spectrometer, you shoot up some material with light, the two interact, and then you detect which wavelengths (think: colors) of light you get coming off it. If your spectrometer is tuned correctly for the gunk you’re inspecting, there should be a difference between the wavelengths of light going in versus coming out. That difference is like a fingerprint. It can tell you what molecules or elements the sample of gunk is made of.

How Many States of Matter Does Impossible Sensing Work With?

All of them! They work with solid, liquid, gas, and even plasma.

What are the Devices Used for?

Many instruments Impossible Sensing develops detect the types of materials you’d expect to see where life is present. But why would anyone care to dump millions of dollars into making instruments to detect life?

Now is probably a good time to mention that Sobron is also a SETI (Search for Extraterrestrial Intelligence) nerd.

Impossible Sensing’s grander vision is to build instruments that will detect evidence of life on Mars and beyond. Projects for monitoring life on the ocean floor are great starter endeavors.

One such project is InVADER (In-situ Vent Analysis Divebot for Exobiology Research). Side note: oh, nice work with that acronym.

It’s set to launch (er, dive?) July 2021. InVADER will monitor life and rock interactions on seafloor hydrothermal vents throughout its year-long mission. With this project, they’ll prove they can detect and monitor life long-term in a place where life is already proven to exist. Additionally, they’ll prove they can make widgets that can withstand really harsh environments — as with a mission to Mars or one of Jupiter’s moons.

No matter what the application, Impossible Sensing’s instruments offer the advantage of quick and easy on-site measurements compared to alternatives of shipping (or shuttling) samples back to a big lab. This, in turn, can speed up timelines of larger projects that need these sensors.

One of their first devices, SpectroGRID shoots a sample with a laser that creates plasma. It focuses a pulsed laser to a very small (~20-50 microns) spot on the sample and hits it with a lot of power. That’s actually not the (extra) cool part. That part of the tech is already-existing LIBS (laser-induced breakdown spectroscopy).

The cool part is it can scan a sample to determine its chemical makeup over the entire surface of one side without any moving parts. That means there’s no prone-to-breakage mechanical stage involved. Instead, light is guided with liquid lenses and MEMS devices to create all the “pixels” needed for a “2D chemical map”.

Again, with SpectroGRID, as with InVADER, you get detailed, on-site answers about what materials you’re looking at quickly.

Other Cool Details About the Space:

The lab is in a basement of a former church, which I personally find a little…disturbing. In between being a church and Impossible Sensing’s lair, it morphed into an event space. Interesting remnants of that middle state still exist, too!

When you first walk down into the dungeon/lab, an artistic diorama greets you. It’s a model of the vents on the ocean floor which one of Impossible Sensing’s instruments will be monitoring in the future, and it looks astoundingly like the real thing.

Compton’s chairs are there! (A la the Compton Effect.) And his blackboard, too!

Space even came with a performance stage complete with a sound system and fog machine. It’s all they need to make those scientific presentations “extra”.

There’s even a large photo booth for widget Glamor Shots.

Shuffleboard is tiled into the floor for Take Your Grandparent to Work Day.

Impossible Sensing has most capabilities on-site for developing a product from concept to prototype to its final form. An exception is the custom PCB’s they send out to be made, but even those are finished and assembled in-house.

3D Printers and (Soon) a CNC

3D printers get a workout there testing out all sorts of designs from handles to lens mounts to faceplates before going to a machined part. It’s an inexpensive way to perfect form and part fit quickly. Sometimes, when the printed part is good enough, it may even get included in the final version of the system.

They’ve got enough electronics equipment to get the job done.

Dirty Lab for When They Get Serious About Making a Mess

One room is reserved as a “wet/dirty lab” for chemistry experiment type work. It used to be the kitchen of the former event space. There, they make test samples to replicate things like a soil sample from Mars or an oil sample for their oil & gas industry clients.

Plus, there are optical benches and a lot of workspace to piece all those instruments together.

How is Making Stuff for Space Different Than for on Earth?

Sobron told us that for the most part, NASA only lets you use technology that’s already proven for space. This is true even if other, newer tech sounds like a way better idea.

Anything we fly to Mars today is obsolete. – Sobron

For example, with the case of liquid lenses, as used in SpectroGRID, those would be theoretically great to use instead of prone-to-breakage mechanical stages! Mechanical actuators are vulnerable components on Earth, let alone when going through a bit of rocket-grade turbulence. However, liquid lenses have never flown on a space mission, so they’re a much harder sell.

There’s a combination of heritage and innovation. NASA is cautious about innovation because in space there are no re-dos; your gizmo has to work right off the bat. – Pablo Sobron, PhD

When you build stuff for NASA, there’s a heritage chart you need to refer to. That shows NASA how much of your system you built from components that have flown on missions before (and survived) and how much of your sprocket is new innovation. Sobron tells us, “NASA is cautious about innovation because in space there are no re-dos; your gizmo has to work right off the bat.”

When the space agency does need to move up to a new grade of technology, they’ll order, say, 20 of something and test them all. The one that works the best after being mauled and abused in testing is the one that flies. The 2nd best working one is your backup, and the rest are toast.

Of course, United States government agencies do leave room for more regular innovation! Projects moving through this graduation process are rated by a Technology Readiness Scale (TRL) that goes from 1-9. A project that’s at stage 1 is still in an early development phase. At 9, you’re ready to fly in a mission – whether combat or to Mars.

During the tour of Impossible Sensing, Sobron showed us some projects at “TRL 4” that they’re working on. These were pretty close to what they expect the final form factor to be, but they haven’t gone through rigorous environmental tests yet.

When you submit a contracting bid, Sobron tells us you need to first ensure you don’t bore the person reading it to death. He takes care of this by investing a lot of brainpower into cool acronyms. The US government loves those things.

It also helps that Impossible Sensing employs a fulltime graphic designer to take care of all aspects of a bot’s image. From illustrations for proposals, to creative and unique housing designs to those glamor shots for the finished device, they got it all covered in-house. Oh, and also “Major Tom”. He’s the space suit Sobron had custom-designed to demonstrate the small scale of their instruments compared to people. That’s also important.

In all seriousness, Sobron credits attention to these details to be one of the keys to getting noticed and winning contracts!

If you’re building an instrument that uses material sensing or other robotics sensing, or you’re applying for a government grant and want some tips from Pablo, you can book a 1-on-1 appointment with him for a limited time.

To do that, go to OddEngineer.com and look for him under the “Optical Engineering” category. Then, book and pay for your appointment. Easy peasy!