I have a notepad and I have a laptop. I’m one of the people who NEEDS a notepad, who looks like a monkey elbow-jabbing a computer screen if you say, “just take notes on your laptop.” CAN’T BE DONE. But ahh, the feel of paper beneath my pen *ahem* So, I have a notepad, but I’ve never had a notepad that could be used to take notes on my laptop. That is until I got my hands on the Lenovo Yoga Book.

The Yoga Book is the smallest, thinnest, Windows-powered tablet I’ve used. It’s also the first I’ve used with both a touchscreen and touch-sensitive keyboard that doubles as a digitizer. Among all the desktops, laptop and mobile options, this tablet… device… book… thingy is likely one of the most overlooked devices in tech and, to my surprise, a powerful, very capable tool for a productivity arsenal. I didn’t get my hands on the previous flip-back Yoga notebooks, so I’m really looking forward to diving into this newer, smaller version loaded with Windows 10. Let’s have a look.

It’s .38″ (9.6mm) thick when closed, loaded with Windows 10 Home, an Intel Atom x5 Processor, 4 GB of RAM, a 58 GB SD and a front and rear facing camera. Both the screen and keyboard area are touch sensitive. The screen is a 1920 x 1200 capacitive touchscreen and the keyboard is a included ‘Real Pen’ can be used within the 10″ x 6.7″ It includes your major Windows apps and a trial of ArtRage painting software.

The specs on the P70 are as hefty as its size and you can max this thing out on upgrades until you’re laughing at the call from the bank about overdraft protection. We’re sitting somewhat comfy in the $2k range for the setup shipped over, but could push up the price on the P70 with additional SSD storage, up to 64GB memory and the top-tier 6th-gen Xeon for a bum-puckering peak price just north of $5,000 USD. For your standard 3D/CAD/Visualization software the mid-range options will do just fine though. Here’s the breakdown on the rig we’re running (with alternative options in parentheses).

The Design
People love this design. The exposed hinge mechanism make it stand out from any other tablet-keyboard combo and the faintly audible tactile feedback through the keyboard makes people wonder if you have some extra sensory communication with it. It’s a Aluminum and Magnesium chassis and enclosure. The slightly angled front edge makes it very easy to open and gives it that additional book-like feel.

‘Halo’ Keyboard
This is where I want to take my desktop keyboard, wrap it around the corner of a wall and toss it out the window. Dubbed the ‘Create Pad’ it doubles as a keyboard and massive touchpad digitizer. The pad is nearly the same size as the area on my Wacom Intuos Pro Medium and, using the same tech, works just the same. The keyboard activates when you use it, can be quickly switched between typing and digitizer mode and does what only mobile OS devices have done, auto-completes and auto-corrects as you type. It’s tablet size, so small and there will be an adjustment to the haptic buzz/fingertip massage as you type. You can place the (included) notepad over the keyboard and sketch away or take notes with ease and instant digitizing of your hand-drawn content.

Real Pen
If you use a pressure sensitive pen on another device, the ‘Real Pen’ will be very comfortable for you. Running on Wacom’s EMR pen tech, it detects 2,048 levels of pressure and doesn’t need a charge. Like the Yoga P40, the combination of touch and the pen works great together. It doesn’t store in or attach to the Yoga Book, so keep it, and the additional nibs, in a safe place.

Here’s a quick overview video showing how capable the device is for sketching/drawing/note taking: 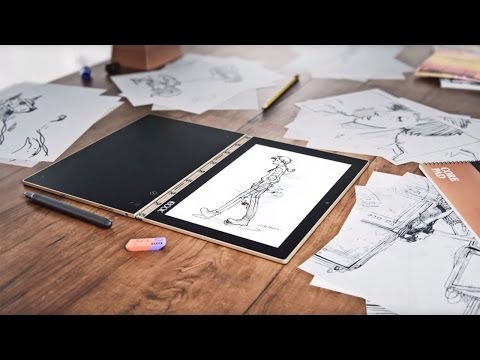 There are certainly some highlights that make the Yoga Book stand out on it’s own, but all the features together make this an incomparable productivity enhancing machine. I never thought my favorite computer would be smaller than my actual notepad or that I would be able to use it right along with paper. I never thought I would need to. The Yoga Book changes my mind about that and calms the frustration of trying to take notes on a tablet or touchscreen. It won’t power through any massive 3d models, graphics or video files, but does hit the sweet spot for more capability than your mobile phone, iPad or Android tablet. Does it make sense to add yet another mobile device to your arsenal? I’d choose it in a heartbet and make it my go to device when I head out the door.

Model of the Week: 3D Printed Carabiner [Belay On!]

Formlabs Shows How Full Color Could Be Applied to 3D Prints