Formlabs Shows How Full Color Could Be Applied to 3D Prints

Hydrographics, if you’re not aware, is the process of applying a color texture to a surface of a non-flat 3D object. The idea is to have paint or a texture floating on the surface of a fluid. The object is carefully dipped in the fluid, where the texture adheres to the surface of the object. It all happens very quickly.

Typically this process is used to produce imprecise patterns on objects, such as a camouflage pattern on a helmet, for example. The problem is that it’s exceedingly difficult to align any specific textures on particular portions of the object’s surface because the adhesion process is non uniform: some texture areas are stretched, while others are compressed during immersion.

But in 2015, some ingenious folks invented a way to do exactly this. Essentially, they develop a texture map that matches the object surfaces to a given texture. It’s like simulating the “dip”. By producing the texture with an inkjet printer, they are able to imprint arbitrary color textures on surfaces of many non-complex 3D objects. You can see how it works in this video. 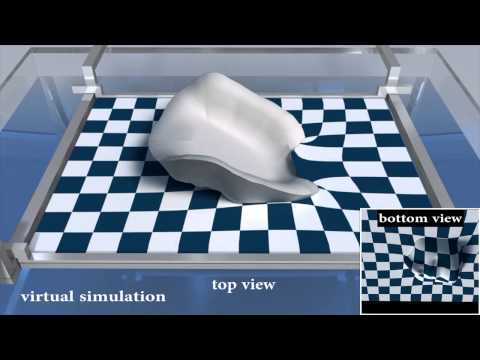 Of course, there are certainly pathological 3D shapes where this wouldn’t work, but given the examples shown in the video, this could be a very useful process.

But that was almost two years ago. Wind the clock forward to today and we see Formlabs experimenting with this same process.

Why would they do so? Well, if you watched the video you would have seen the hydrographic system requires:

A tank to hold the water and floating texture
A mechanism to gradually lower the object into the tank
Wait a second, that’s EXACTLY what a resin 3D printer like Formlabs equipment uses! The Form 2, for example, has a Z-axis that gradually raises (and can lower) a 3D model. It also has a tank that normally holds resin from which emerges the completed 3D print.

But swap the tank with one filled with water (and a floating texture), turn off the laser, mount and lower an object and you have a hydrographic printing system.

There’s one catch: the software that produced the startling results in the video has not yet been released. If it had, then Formlabs’ setup would be able to do the same process on almost any object printed on their equipment – because it would by definition fit into the tank.

Formlabs’ experiment involved “faking” the software by developing UV texture maps for a specific 3D shape as a result of the missing software, but the point is the same: this machine – and any similarly designed resin 3D printers – is relatively easily adaptable to become a hydrographic printing system.

Let’s take this idea a bit further with our imagination.

Would it be possible to 3D print a high-resolution object (yes) and then print a texture on its surface IN THE SAME MACHINE?

I suspect this would require some engineering to accomplish, as you’d have to include a method of printing the texture sheet and inserting it onto the water surface provided by a tank you’d manually swap in. An intermediate stage would be to simply 2D print the texture map separately and put it in the tank before it’s loaded.

Another challenge would be to complete the 3D print within the machine, which normally requires washing in solution and sometimes a post-print UV bake for final solidification. That would certainly require additional hardware components, but it would not be impossibly difficult.

Such changes would make the machine more expensive, perhaps even double the price. But you’d end up with a machine that could literally 3D print full color, high resolution objects on demand.