Raise of hands. Who has rebuilt an engine? How about a Flathead V-8 engine? Ahh, the Ford Flatty. Likely the most iconic engine of its time, if not all time, and certainly the most powerful when it came out in 1932 as the Ford V-8.

Prior to the Ford V-8, it was all 4 and 6-cylinders, with V-8s left for the luxury class of automobiles. This engine was designed to house the camshaft over the crankshaft with all 8 cylinders popping off power from within a single-piece cast iron engine block. The original came with 221 cu in (3.6 L) of displacement and went all the way up to 337 cu in (5.5 L) near the end of the Ford V-8s product life in 1953. If you’ve ever had an engine class, or have worked on a Ford roadster, coupe or pickup, the Flathead V-8 was like part of it.

In fact, a 1932 Ford Roadster is what inspired Vic Edelbrock Sr. in the design and manufacturing of the first Edelbrock intake manifold (you’ll see it along with Edelbrock cylinder heads in the time-lapse). Decades later and they’re still at the top of their game for aftermarket mods. Hagerty, insurer of classic cars, with the help of Edelbrock and Thirlby Automotive in Traverse City, MI., captured what it was like to go through a complete rebuild of a Flathead V-8 for a Ford pickup. Over six days, within 40,000 photos they produced a six minute video that captures it all. 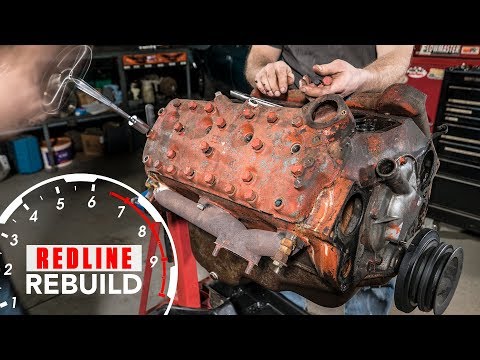 If it took that much time to rebuild a Flathead V-8, I’d do it every day. Have you rebuilt a Flathead? Any engine? This has me looking over Craigslist for project cars and engines, and an original ’52 Ford pickup with original Flatehead is looking awfully tempting.

The $28 BrushKnob Speeds Up Your Digital Product Creation Workflow

Could a 3D Print Be Finished with the World's Darkest Material?