When you saw Star Wars or Star Trek for the first time as a kid, the space travel scenes were pretty kickass. Especially on the big screen – it seemed way cooler than the so-so acting. Well here’s you’re chance to actually travel through the Universe – the real Universe as recorded by the Sloan Digital Sky Survey. Watch the filaments of stars and galaxies whiz around as you travel at a million times the galactic speed-limit. I may not have my warp capable Cadallac, but gosh darn it, I’ll take what I can get in this century. At least I’ll know what kind of ride I’d be getting. 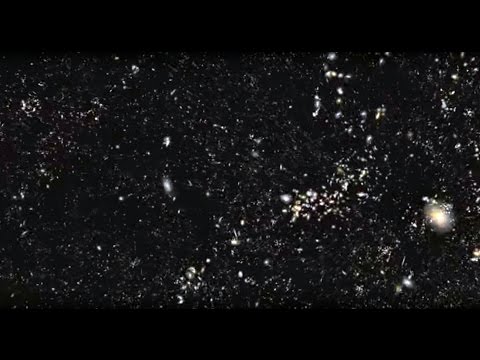 For those curious about the Sloan Digital Sky Survey, here’s a blurb taken from their website.

The Sloan Digital Sky Survey (SDSS) is one of the most ambitious and influential surveys in the history of astronomy. Over eight years of operations (SDSS-I, 2000-2005; SDSS-II, 2005-2008), it obtained deep, multi-color images covering more than a quarter of the sky and created 3-dimensional maps containing more than 930,000 galaxies and more than 120,000 quasars.

SDSS data have been released to the scientific community and the general public in annual increments, with the final public data release from SDSS-II occurring in October 2008. That release, Data Release 7, is available through this website.

In reality, you are travelling through the Galactic equivalent of Google Maps. If you notice at minute 1:04, you can see a UFO. I Want to Believe.