The “WorkHorse 3D” is a 3D printer able to do some functions few other machines can accomplish.

First, it is one of several “continuous” 3D printers in that it can, by itself, automatically unload prints and commence 3D printing a subsequent object. The Workhorse 3D does this by use of a conveyor belt system.

The print is applied to the stationary belt in the usual manner. But when the print completes the belt is engaged and the print actually rolls off the belt when the belt curves away under one of its rollers. All you need is a basket to catch the prints as they complete.

This seems to be a scaled-up version of MakerBot’s “Automated Build Platform”, first sold eight years ago. While much smaller than the current Workhorse 3D option, the two solutions are of a similar concept.

I’ve used the MakerBot ABP and found it was indeed amazing in that it could literally allow near continuous production of objects. I actually did need a basket to catch the dozens of objects being printed.

But there was a problem, and I discontinued using the ABP, and in fact, MakerBot themselves discontinued the project shortly thereafter, never to market any similar product.

The problem was that when the belt is printed upon, it is subjected to high heat. After repeated high heat exposures, the belt began to warp slightly. This presented the nozzle with a less than even surface to print on, resulting in failed prints. The belt had to be continually replaced.

I’m not sure if the Workhorse 3D has the same problem, but it might be possible to avoid the issue if an appropriate material were used for the belt. It would have to be a flexible and elastic material that withstands high heat and also provides appropriate adhesion for prints in at least PLA, if not other materials.

Nevertheless, the Workhorse 3D as is can produce continuous prints. 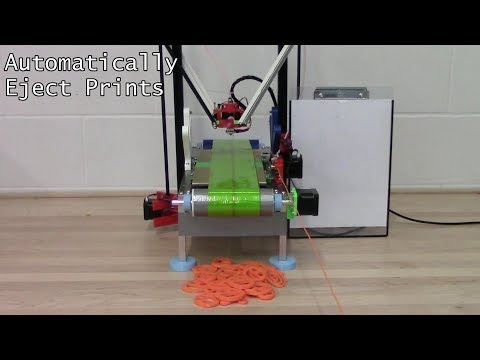 But there was something strange about the motion system, which seems to involve two parallel mounts. My confusion was answered when I continued to watch their video, which shows that the two extruder mounts can be tilted!

This creates a scenario where the nozzle is angled to the build plate – or build belt, I suppose. By moving the belt appropriately when the nozzle is at an angle it becomes possible to 3D print infinitely, in much the same way that Stratasys’ infinite build demonstrator was able to do.

Owais created not only the hardware to do all this, but also created the software to drive it, which is obviously required because common 3D printing operational software would not understand this highly unusual configuration.

While the project was a submission to a Hackaday contest, it seems that Owais is hoping to refine the configuration sufficiently for it to be added to the RepRap family of 3D printer designs. If so, we may see commercial versions of the concept become available.