Last November, SolidSmack reported on Gerhard de Clercq and Pieter Scholtz, two South African teens who developed a clever app that allows users to transmit plotting data from their mobile phones to 3D printers via Bluetooth. After achieving some well-deserved fame and respectable media coverage, the duo continued their work toward refining their original creation. The product has officially been released, and is now available for download. 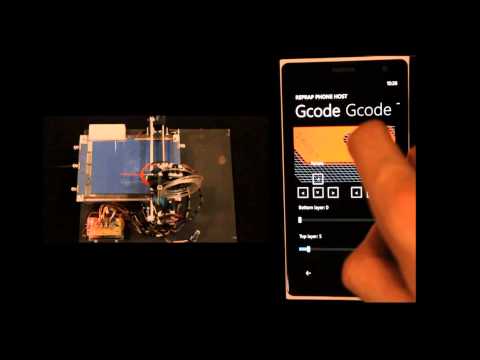 The $0.99 app is called RepRap Phone Host, and it works with Windows Phone 8. In addition to basic processing, movement, and rotation features, the 2 MB app gives users the ability to render in STL and G-Code. It also features a slicing option based on the original “Bananna Chopper” software that the team created, which allows the operator to slice STL files. It does all of this in a clean GUI that is color blind-friendly…Cheers!

RepRap Phone Host is compatible with RepRap-type 3D printers that run Repetier-Firmware and are equipped with a Bluetooth serial bridge. If you have access to a RepRap printer and a Windows Phone, achieving compatibility is not terribly difficult if you lack the bridge and the firmware update. Repetier-Firmware is free and can be downloaded directly from the company website, which also includes extensive literature and documentation about the product. RepRap printers normally convert serial to USB, so adapting one to accommodate Bluetooth is a matter of acquiring a USB Bluetooth adapter and doing a bit of DIY work, which is not overbearing if you fancy yourself as handy.

If you want to know more about the finer details of RepRap Phone Host, it is definitely worth taking a moment to poke-around the Bananna3D website. The site is still very raw at this stage, but it should answer most of your basic questions and direct you toward further reading for relevant inquiries. You can also contact the development team directly through the website.

Scholtz and de Clercq initially developed their app with the motivation and intent to make 3D printing more accessible in Africa. In various media, the team has pointed-out that smartphones are more commonly found in Africa than are capable computer setups, so it is therefore logical to make the best use of the most powerful technology that is commonly-available to a broad audience.

If you are unfamiliar with RepRap, it is an open-source community-based project aimed at do-it-yourself 3D printer design and assembly. It is centered-around the idea that you can 3D-print parts with one machine to spawn another. This prospect of self-replication for 3D printers is one of the essential concepts that makes the idea of bringing 3D printing to developing nations so exciting, as it makes the actual process of obtaining 3D printers that much more feasible.

Reinventing the Wheel. The Smart Wheel vs. The Copenhagen Wheel (Part 1/3)