These days, most digital tasks can be completed with a current smart phone, but until very recently, 3D printing has not been one of them. However, Gerhard de Clercq and Pieter Scholtz, two fifteen-year-olds from South Africa, have set-out to change that. The student duo recently unveiled an app that they programmed which can accurately feed data to 3D printers via Bluetooth. 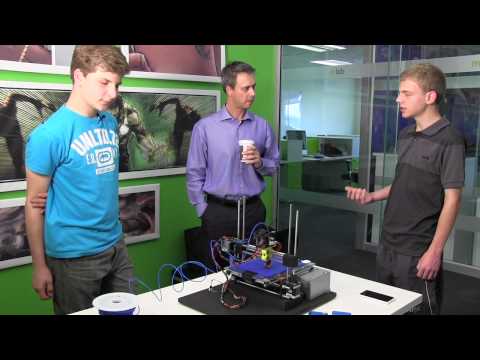 The app that the team developed is able to slice a 3D model and also offers movement and rotation adjustment options, which the phone can translate to a 3D printer. The app exports data in G-Code and it also receives data back from the printer. It displays live-updates of printer temperature, progress and estimated time remaining, among other things—so it is not just useful, but handy as well! Additionally, the program renders and processes surprisingly fast, especially considering that the Nokia Lumia 920 that the team used as the host is not exactly a powerhouse compared to some of the other smartphones currently available.

Scholtz and de Clercq developed their app with the motivation and intent to make 3D printing more accessible in Africa. The way that they plan to do this is by cutting-down on the cost of materials, and minimizing the devices and processes generally required to print solid models—a pretty logical and smart way to approach the challenge. In various media, the two students have mentioned that smartphones are more commonly found in Africa than are capable computer setups, so it is therefore logical to make the best use of the most powerful technology that is commonly-available to a broad audience.

The printer that the duo used to showcase their innovation is a modified RepRap that Scholtz and de Clercq assembled and adjusted themselves. If you are unfamiliar with RepRap, it is an open-source community-based project aimed at do-it-yourself 3D printer design and assembly. It is centered-around the idea that you can 3D-print parts with one machine to spawn another. This prospect of auto-regeneration is one of the essential concepts that makes the idea of bringing 3D printing to developing nations so exciting, as it makes the actual process of obtaining 3D printers that much more feasible.

In various demonstrations thus far, Scholtz and de Clercq have printed usable protective cases for Nokia Lumia smartphones. In many ways, their choice of subject-matter further emphasizes the prospect that someday devices may be able to fully replicate themselves. Gerhard de Clercq and Pieter Scholtz were awarded gold medals at the 2013 Northern Gauteng Expo for Young Scientists for their achievement—way to go guys!