We all know Eric Strebel is a savant when it comes to prototype making. He’s done a hundred cast parts from a single master part, used a CNC machine to manufacture 200 vaccum-formed panels, and even showed us how to finish and paint different molds. 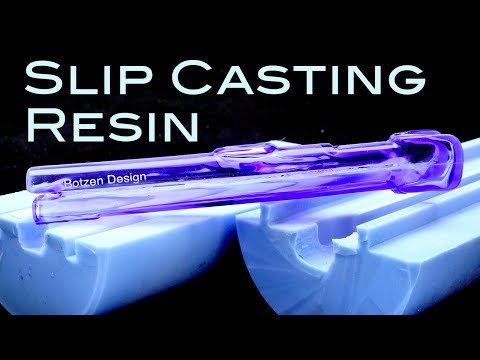 In his latest video, Strebel dips into the world of slip casting and combines his knowledge of resin casting to create a prototype for a medicinal blow molded part.

The trick involves stacking several layers of resin. Before mixing the resin, Strebel prepares a translucent color pigment which he then adds to the mixture.

Once the mixture looks like purple slime that could double as a prop for a Ghostbusters film, he pops it into the vacuum tank to de-gas all the air before popping it into a silicone mold.

To keep the cast hollow, Strebel rotates the silicone mold, so only the outer layer gets coated in resin. He pours out the excess resin through the same pouring hole for use in another layer.

Before doing the other layers, he has to first keep it under 60 psi for two hours. This prevents bubbles from forming inside the cast and prepares it for another round of casting.

This process of resin mixing, de-gassing, applying, and pressuring continues for three more cycles (not including the first one). As Strebel explains, slip casting involves using plaster molds which soak up moisture from the ceramic material used to create jars and other types of vessels. He just ripped off a bit of the technique and used it in his resin casting.

After the resin has cooled and the part has been removed from the mold, Strebel trims down the imperfections with a Dremel tool to give it a professional, blow molded look. Most of the trimmings are done on the tip of the prototype, as this is where the entry point for the resin used to be.

He slaps on a graphic to finish it off…and voila; a resin cast that looks blow molded. As with all his product and design videos, you can find more of Eric Strebel’s expertise on his YouTube channel.e

Launch Your Product Idea with The Entrepreneur Training Bundle (95% Off)