Introduced by Lesney Products in 1953 as a way for British children to bring toys to school that satisfied the “toys must fit into a matchbox” requirement, the Matchbox brand of die-cast cars have since become one of the most iconic toy brands of all time.

While the brand expanded out from die-cast cars into plastic action figures and other popular children’s toys to keep up with competitors in later years, their legacy helped define modern toy manufacturing as we know it today.

In this fantastic video from 1965, we get a (short but sweet) behind the scenes look at the dedication that went into producing each and every die-cast car on the line. 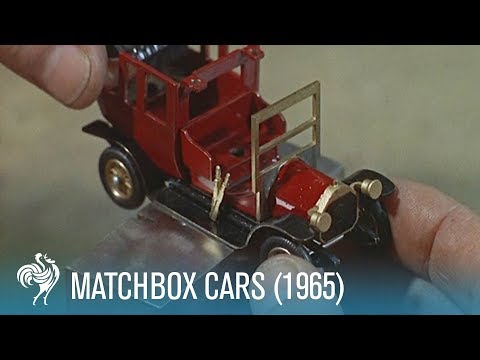 (The video) begins with fabulous shots of model cars and trucks on a moving conveyor belt. Looks like a surreal motorway with brightly colored cars moving along it. Traffic a go-go!

Shots of men at their drawing boards designing Matchbox models. C/Us of prototypes being created – tiny parts are painted then a wooden prototype is created. Mould is made then scaled down. A man operates a pantograph – cutting a mold. Various shots of cars being made. They are then placed on a conveyor belt and are spun around as they are sprayed by a paint machine. Wheels being applied and women working on a conveyor belt adding small details like clip in seats.

(This is the) Matchbox Cars factory.

Be Your Own Boss! Or Not.