You might have seen a gun equipped with a silencer in your favorite movie, show, or video game before. With a long, metal tube attached to the barrel of a firearm, you would hear the iconic *tfft* of muted bullets as they whiz towards their targets. But fiction is rarely anything like real life, and silencers cannot completely eliminate the sound of a gunshot emanating from a gun.

There’s a lot of sciencey stuff behind it but to make things more digestible, gun silencers create a chamber for high-pressure gas to dissipate. Firing a gun requires gunpowder, and the air pressure generated from firing a bullet is massive (around 3,000 psi). Add that to the fact that most bullets break the sound barrier regularly, and you’ve got a portable mini fighter jet in the palm of your hand.

What gun silencers provide is a controlled environment for both the air pressure and the sound. This regulates them before being ejected into the outside world. The muzzle flash and noise from a silenced gunshot aren’t eliminated entirely, but they are significantly lowered.

That said, it would take a comically large silencer to attain the same amount of muted sound and muzzle flash you hear and see in pop culture firearms. You could do the smart thing and wait for gun manufacturers to do just that, or you could be like YouTuber Alex C. Vincent and make a custom-made silencer of your own: 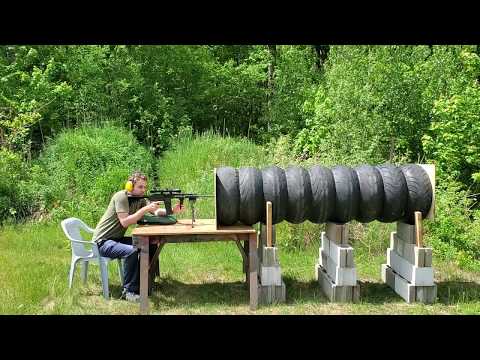 In the short but sweet video, Alex demonstrates how 9 car tires stacked side by side can be used to mute the gunshots of a WK180-C semi-auto rifle. With two planks of wood stacked on either side of the tires, it severely decreases the sound and flash from the 5.56 mm bullets.

Take note that even with this large setup, the gunshots are still nowhere near as quiet as those you hear on TV. They still echo loudly within the tires, but aren’t as noticeable in the distance.

The larger the silencer, the more quiet the gunshot. Of course, this rule trades silence for portability. It would be hilarious to see a hitman carry car tires to his bedroom only to use them as a makeshift silencer for his sniper rifle. Silly. Yet, this experiment from Alex has proved something here.