In the vast and wonderful world of guitar pedals, it can be hard to stick out from the crowd, but 21-year veteran guitar pedal builder Zachary Vex just might have developed the strangest and most unique pedal to date: the Z.VEX Candela Vibrophase.

Powered entirely by a tea light candle, the vibrato/phaser is a highly-efficient – hand-machined – low-power Stirling engine that just so happens to rock…hard! Although the Stirling engine has fallen into relative obscurity, its simplicity still resonates with fans of 1800s technology. Aiming to bridge the best of both worlds, the Candela Vibrophase can run completely independent from external power sources and batteries.

Says Vex on the early background and development of the pedal:

“During the early winter of 2015 we were preparing for the 2016 Winter NAMM show and I decided to start working on a phaser/vibrato, one thing we’ve never had in our lineup before. As I came close to completing the socketed prototype I came to a sudden and dismaying realization… I had just reinvented the wheel. My sadness shifted to anger over somehow losing my way with my company’s vision, and then I had a flash of insight. We’ve been hand-painting and decorating pedals with steampunk-inspired artwork over the last couple of years, and I considered how exciting it could be to use as much 1800s technology as possible to build a guitar effect. A real steampunk guitar effect.”

The vibrato/phaser effect works when heat from the candle (combined with solar cells) provides a temperature differential to drive the engine’s piston which, in turn, powers the flywheel. Powered by the flywheel, an optical disc with an offset opaque coating then spins above the candle. The resulting intermittent input results in the desired tremolo sound, which can then be adjusted via a series of onboard levers and a mysterious spherical magnet: 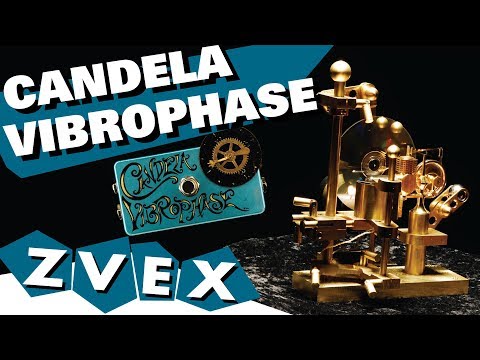 Find out more about the background, development, and specs on the $6,000 Candela Vibrophase over at ZVEX.