As far as DIY weaponry goes, Joerg Sprave of the Slingshot Channel knows a thing or two about turning otherwise random objects into near-deadly projectiles. Among his expansive portfolio of ingenious solutions for surviving a zombie apocalypse, the Slingshot Zombiehammer with Skull Ejector and Skull Splitter Zombie SlingSword are surely weapons that you don’t want to be on the receiving end of.

More recently, Sprave turned his attention to something significantly less deadly: The Ping-Pong Hailstorm Fully-Automatic Slingshot Gatling Gun. Rather than warding off zombies, however, the Hailstorm is designed to “punish” game show contestants who give wrong answers.

“Sometimes we do get interesting job offers,” explains Sprave. “The (Hailstorm) will be used in a crazy TV show, against the behind of protagonists who gave wrong answers. Therefore, it had to be weak in order to avoid injuries.”

Despite the device legally classifying as a toy, it was significantly more complicated to develop than his more deadly weapons – particularly because Sprave had to develop a transmission to launch the balls while working against the rotational force of the Gatling barrel set: 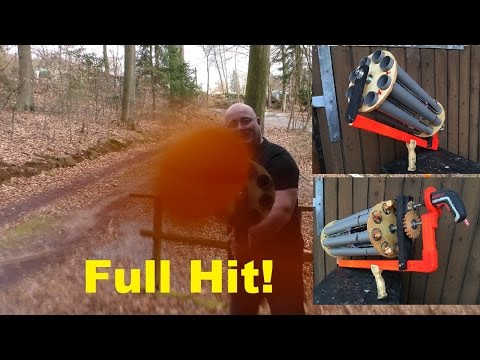 Who brought the paddles?

Behind the Design: How Vinyl Records Are Made (In 60 Seconds)