How are vinyl records made? Have you spent nights awake just pondering that? Well, let’s put your mind at ease. It begins with a metal flat disc and a coat of lacquer, and ends spinning on a turntable. Boom. Done. The Vinyl Factory provides a glimpse on how they make records in a 60 second video montage of their manufacturing facility.

In their current form they’ve been around for ages, well at least since 1901 when Emile Berliner and Eldridge Johnson came together to form RCA Victor and mass produce 10 and 12-inch records. These were typically made from some shoddy materials such as hard rubber or shellac that was mixed with rocks! No kidding, the shellac, which is resin made from the lac bug, was usually mixed with finely ground slate and limestone to produce rigid records that were typically brittle and easy to break.

Suffice it to say, advancements were made in the materials and machinery used to manufacture records, but the process still remains relatively unchanged, which was noted in a short video recently released from the UK’s Vinyl Factory. 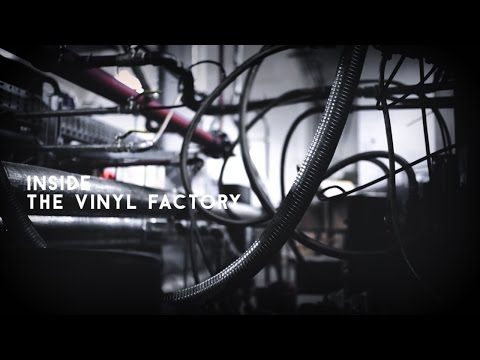 The exclusive video gives viewers a unique look behind the scenes, which begins with the cutting of the master disk, coated with a layer of lacquer and etched with a needle that engraves electric signals onto the surface. The disk is then coated, typically in silver or metal for the master, which forms ridges and is then used to make the ‘mother’, which is then used to form the stamper or negative used to make the final record.

The stamper is then placed into a hydraulic press where a ‘biscuit’ made from heated vinyl pellets is sandwiched between the two plates. Incredibly hot steam is then introduced to help keep the vinyl soft, which is then pressed and cooled with the label applied. The record is then inserted into a paper or cardboard sleeve and ready for shipping. Obviously, the process takes longer than the 60-second video, however, each step is briefly shown and it’s a great overview for those who haven’t seen the How it’s Made episode on the Discovery channel.

behind the designHow It's Madethe vinyl factoryVinyl Records
0