Similar to other board sports that have taken the recreation and lifestyle industries by storm, some of skateboarding’s most influential developments didn’t occur in a research lab, but rather the garage of an engineer.

After studying engineering at Stanford University, engineer George Powell started making his own skateboards in 1957. Almost twenty years later in 1974, his son asked for a skateboard and – similar to other hand-me-downs – Powell pulled one of his own original designs out of the family’s garage.

Of course, a lot had changed over twenty years and Southern California skateboarding culture was in its early stages of becoming a popular lifestyle culture as seen in movies such as Dogtown and Z-Boys.

After his son complained that his father’s original board wasn’t riding smoothly, Powell’s own interest in skateboarding was revitalized and he soon went back into his workshop to develop a smoother ride experience. What came out of his experimentation was the modern day urethane wheel – which Powell soon after started producing for other riders. Naturally, this newfound love for skateboarding led to not just creating the wheels for boards, but the skateboard decks as well.

“We design our products knowing that they’ll be slammed into concrete.”

Soon after – and strikingly similar to Apple Computer – the Powell Skateboards brand was born out of Powell’s California garage thanks to a great idea and clever marketing (thanks in no small part to a new partnership with original Z-Boy Stacy Peralta) that spoke to a new generation of counter-culture skaters. The wheels would later become known as “Bones” – named after their bone-like natural urethane color – and Bones riders would later become known as the iconic “Bones Brigade“.

Today, Bones wheels and Powell skate decks are still among the top-selling decks and wheels in skate shops around the world.

In this mini-documentary released recently (by none other than Stacy Peralta), George Powell gives us an inside look behind the modern-day skateboard factory that was born out of his garage over 40 years ago – with over 150 employees that make the entire operation possible. Perhaps what’s most impressive, is that Powell has managed to keep the entire operation under a single roof – meaning that from design and raw material to finished and rideable skateboard, everything is done at a single location: 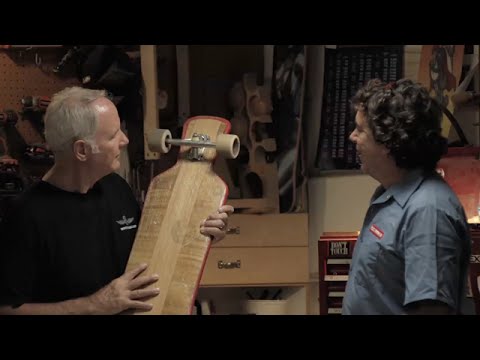 Powell recently teamed up again with Stacy Peralta and today, the entire Powell Skateboards brand is now known as Powell-Peralta.