While most people prefer to park their car on the street in favor of using their garage as a workshop or walk-in utility closet, stuntman and woodworker Ben Tardif had other plans: he converted his entire garage into a giant marble rollercoaster.

Called Marble Mountain, the ‘still under construction’ marble machine consists of 25 sections that mesh together to form one large kinetic sculpture that requires a minimum of 250 marbles at a time just to run properly. Similar to quirky hole designs on a mini-golf course, each of the 25 sections has a theme that plays into how the marble interacts with that particular section; it jumps at the ski jump and rides the skateboarding halfpipe, for example.

“Every element is themed (or will be upon completion) to an aspect of my life or to something that I find interesting. Some of the elements include a roller coaster, ski jump, Times Square, Lombard Street, and a skatepark. It took 3 years to get to this point of being able to turn it on and watch it go, and I will continue to work on it and get it fully completed.” 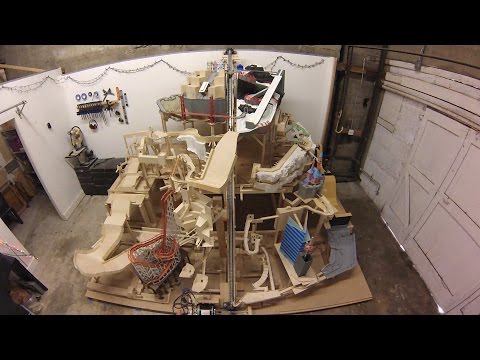 Frankly, I don’t know if I can come up with any reasons why not to build a Marble Mountain in one’s garage. For those who want to learn more about the build process, Tardif has documented the build on Instagram under the #marblemountainproject hashtag.

Are You the Next Adam Savage? Casting Call Opens to Find New MythBusters Hosts