For some, it only exists if it includes mounds of bacon and a steaming stack of syrup-soaked hot cakes. For others, it’s as simple as a bowl of shredded wheat and a handful of blueberries. No matter how you prepare it, though, chances are your first meal of the day isn’t necessarily the most pleasurable meal to prepare when rushing out the door, right?

But what if you could automate the breakfast-making and eating process just like you would automate a coffee maker to wake you up with the sweet smell of caffeine at 6 AM?

In an article for Motherboard last week, Swedish Creative Technologist Simone Giertz recently took on this task of building and documenting what she calls a “Breakfast Machine”: a robotic arm that’s programmed to pour her cereal and milk into a bowl and feed it to her with a spoon. Of course, programming a robotic arm to make precise movements towards one’s mouth isn’t necessarily an afternoon DIY project – and Giertz was up for the task.

“The only catch was that I had to learn how to program a robot arm and code a pretty complicated sequence to have it serve me breakfast,” she explains. “But I was up for the challenge because the best way to avoid real problems is to deal with fake ones.”

Armed with a $339 uArm robot arm, a plastic spoon, a ⅔ empty carton of milk (light enough to lift), and a medium-sized package of low-sugar cereal (to avoid sticky messes), Giertz “choreographed a robot dance” around her morning breakfast routine: 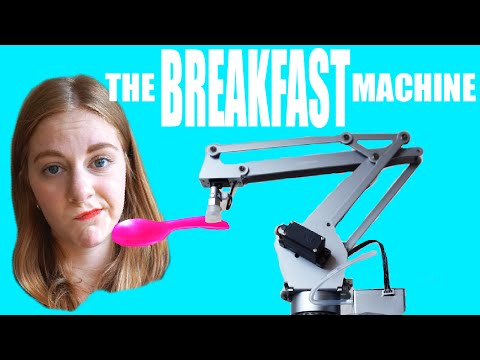 Head over to read Giertz’s full build analysis over at Motherboard.