Though you could easily pull up Google to research facts for yourself, you would be missing out on the awesome animation work done by Jared Owen. He uses 3D animation software to explain things, and what better way to do so than with moving pictures made using a computer?

His Statue of Liberty video, for example, gives an in-depth look at the inside of Lady Liberty: 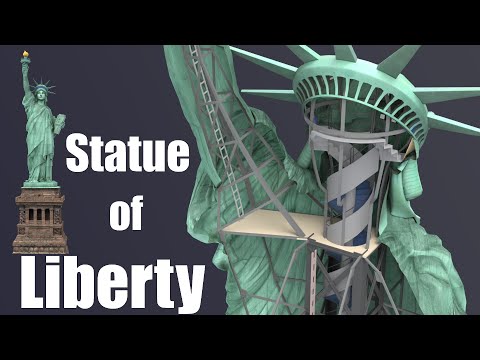 Did you know that the outside of the statue is made out of thin, 2.4mm sheet copper? Or that its original color was, well… copper?

Liberty Enlightening The World (the real name for the Statue of Liberty) was designed by Frédéric Auguste Bartholdi. Before making a statue 93m (305 ft.) tall, he first made smaller models.

The first was a clay model standing 1.2m (4ft.) high. The second and third sculptures were plaster sculptures that measured 2.4m (8 ft.) and 10m (33ft.) tall. As the models got bigger, Bartholdi could fine-tune the many details for the final statue.

An interesting fact is how they shaped the copper sheets to make the statue’s exterior. They used a method called Repoussé, wherein wooden molds were built next to 1:1 scale plaster pieces of the statue and fitted with the copper sheets. These sheets were hammered into the molds and fitted with iron straps to support them. And there you have it: one of the many copper pieces of the Statue of Liberty.

An iron exoskeleton was placed inside the statue to strengthen it against the elements. The center is a column made of thick iron, with smaller support beams emanating from it to help support the copper plates.

It took almost 10 years to build the statue in France, at which point it was broken up into 350 different pieces and shipped to the United States. Upon arrival, it took another 4 months to reassemble it on Bedloe’s Island – the last name of the Liberty Island you know today.

The Statue of Liberty has had renovations made to it in the past – most notably the installation of a new torch back in 1985. The old one was leaking rainwater and is now housed in the new Statue of Liberty museum on Liberty Island. Despite all these improvements, no one ever bothered changing the statue’s now-iconic green color, which is the result of the oxidation of the copper plates.

Jared Owen goes even further and gives a digital guided tour of the statue. He showcases the insides of both the statue and the pedestal it stands upon – which are just many stairs, elevators, and platforms where you can take in the views. As a bonus, he even takes you beyond the tour and shows what can be found atop Lady Liberty’s arm.

The whole video is definitely worth watching if you’re planning a trip to Liberty Island anytime soon or if you just love good animation. Jared made this video using the Cycles Render of Blender 2.92, with his other works using different versions of Blender’s computer graphics software. You can find all of them over on his YouTube channel.