There have been many types of military helmets over the years, as seen in this video by Crazy Hydraulic Press. To kick off 2022, they pitted a couple of military helmets (a steel one from 1968 and a Kevlar one from 2008) against possibly the strongest industrial machine there is. 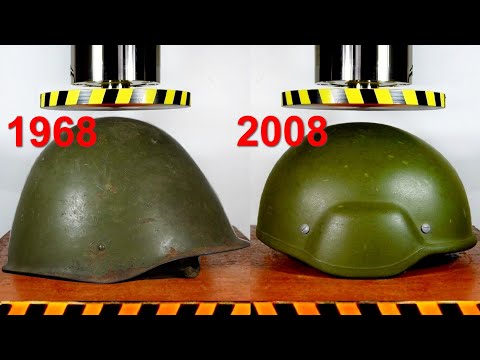 They first did a controlled experiment using an average worker’s hard hat. Since this particular helmet aims to prevent head-related accidents in construction areas, it only makes sense that it should be the strongest in this situation.

While the helmet started contorting at around the 200kg mark, further increases to pressure revealed that it required 668kg of force to damage the would-be person wearing it. Unless all that pressure dropped on them at once (like, say, with a fast-falling girder), a construction worker would have ample time to remove their helmet and move to safety.

With the control out of the way, it was time to put the military helmets to the test:

First up was the 1968 steel military helmet. While more cumbersome than today’s Kevlar helmets, this specific helmet could stand a whopping 10,212kg of pressure. That’s over ten times that of the hard hat!

The only problem with the steel helmet is the way that it collapses. Unlike the hard hat,  which neatly folded into itself, the steel helmet crumbled into pieces. These jagged parts were sharp enough to scratch the hydraulic press, so imagine the damage it could do to an exposed human head.

Moving onto the more modern 2008 Kevlar helmet, this one could only withstand a mere 1,970kg before succumbing to the hydraulic press’s might. But just like the hard hat before it, the Kevlar hat neatly folded onto itself, thereby reducing the damage the wearer would receive. So while both helmets could withstand a bullet or two, you might want to pick the old 1968 helmet if you were fighting in a war where debris starts falling around you.

Funnily enough, the final experiment showed that a riot helmet could withstand just as much pressure as the Kevlar helmet, despite being made of hard plastic. 1,815kg of pressure is nothing to laugh at, especially if it’s your head under that helmet.

It seems helmet designers decided to trade a bit protection for functionality, as all of the modern helmets are lighter and easier to wear than the steel helmet. Crazy Hydraulic Press did these experiments on a hydraulic press, and the best way to test military protective hardware would be to pit them against live munitions.

Still, it’s always fun to see stuff get crushed by a hydraulic press. If you want to see more industrial-grade destruction, check out the Crazy Hydraulic Press YouTube channel.