Since 2010, Gav and Dan of The Slow Mo Guys have made it their mission to take everything and anything under the shutters of a variety of slow-motion cameras. While you can always expect the results to be visually appealing, sometimes you can learn something new by looking at everyday objects through a very fast and very powerful camera lens. 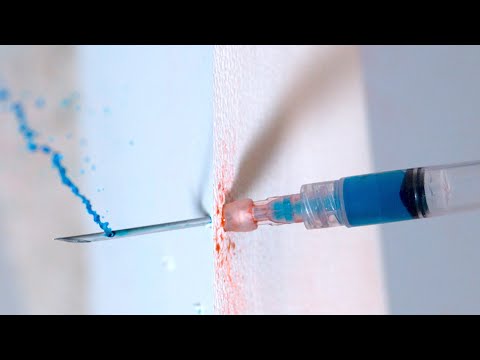 Case in point: a tranquilizer dart. You know that when one of these babies hits you, you will be sent to Dreamland in a couple of minutes.

But did you know that the hole which injects the sleeping agent isn’t found at the tip of the hypodermic needle? Upon inspecting the dart for the first time, the duo has noticed a second hole on the side of the needle which is covered by a rubber stopper. When the needle punctures an animal (or a person), the stopper gets pushed back by the target’s skin, allowing the sleeping agent to enter their bloodstream.

There’s a lot more to it than that, so The Slow Mo Guys shoot a couple of darts filled with food coloring at a piece of faux leather. They then capture the footage with their Phantom Flex 4K slow-motion camera; first at 1,000 fps, then at 3,000 fps.

After loading and shooting the first dart, you can see just how strong and quick the food coloring spurts out of the hole. The sheer force of the impact makes it possible, allowing the pressurized air in the dart to inject the drug at a rapid pace inside the target. Couple this with the long needle, and you can be sure the dart will pierce deep and won’t fall out until it has done its job.

Next, they do another shot at 3,000 fps from a couple of different angles. While the result is unsurprisingly the same, Gav notices something he has missed at a lower framerate: the rubber stopper doesn’t actually get pushed all the way back once the dart hits its mark. Instead, it bounces backward before being forcefully pushed into the faux leather by the rest of the dart.

Gav and Dan conduct one final experiment, this time with a water balloon on the exit point of the faux leather to mimic the blood inside a living animal. They should have really gone with a more organic container, as the balloon pops before we can properly see the food coloring mix with the water. But thanks to the power of slow motion, we can catch a small section of water near the dart’s entry point which turns a lighter shade of blue before it pours down to a container below.

So – yes – you can learn a thing or two by watching things in slow motion. The footage is awesome and all, but things you can only read about are further emphasized when you can see them in action. For more slow-motion goodness, check out Gav and Dan on The Slow Mo Guys.