All this talk of innovations that haven’t come out yet and we end up forgetting the ones we already have.

For instance, have you ever stopped to wonder about how Dippin’ Dots ice cream got its unique beaded shape? You know, those tiny clusters of circular ice cream which could be a potential hazard if spooned into the nostrils? The secret is more obvious than you might think.

One of the older videos in Food Network’s YouTube channel details the process by which these edible dots are made: 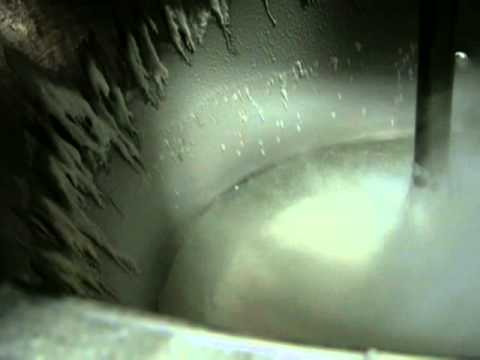 Each of the 200 gallon vats hold a different flavor, which is thoroughly mixed before being sent to the cryogenic processor.

This is where the similarities between normal ice cream and Dippin’ Dots end. Instead of pumping the flavor mixtures into individual containers, the makers of Dippin’ Dots drip their concoctions into a reserve of liquid nitrogen.

Under the −320 °F temperatures, the drops of ice cream freeze instantaneously, creating beads of frozen delight too cold for your tongue to touch. The beads are then stored in a climate controlled room before being shipped to stores worldwide.

The concept of bite-sized ice cream came from Curt Jones, a microbiologist who used his scientific know-how from a biotechnology company to create something which could be appreciated by a wider audience. After all, who doesn’t love ice cream?

The factory creates up to 2.2 billion Dippin’ Dots per day, with new flavors being introduced regularly.

If you want to see more videos about how your favorite quirky foods are made, Food Network’s YouTube channel has more than enough to get you hungry. Oh, and if you want to try making it yourself, the CrazyRussianHacker shows how he made some on his coffee table.