MatterHackers, a California-based 3D print reseller, markets a variety of different 3D printer brands and a wide set of filaments as well, but to us they are most well known for producing a very interesting set top box for typically “dumb” desktop 3D printers.

Many desktop 3D printers are pretty basic when it comes to control functions, with many offering the most rudimentary interface of a crappy and small LCD alphanumeric panel with a pushbutton for input. More advanced machines may offer larger color touchscreens and more sophisticated interfaces, but they tend to carry high price tags as well.

Enter the world of 3D printer set-top boxes, where an external unit drives the printer by leveraging the USB input. USB input ports on desktop 3D printers were originally intended to be used by a nearby computer to drive the machine, but that rapidly fell out of favor as it tied up computers during very long prints. Instead, this port is most frequently used today for controlling the machine via a set-top box.

By adding a set-top box you effectively are adding a smart front panel that’s large and controlled by touch, transforming what otherwise might be a dumb 3D printer into something far more sophisticated.

It also means you can toss away the need for SD cards, USB sticks, and cables.

MatterHackers has released such a device previously, which we took a look at in 2015. Now the new MatterControl T7X incorporates all those features and adds a few more. 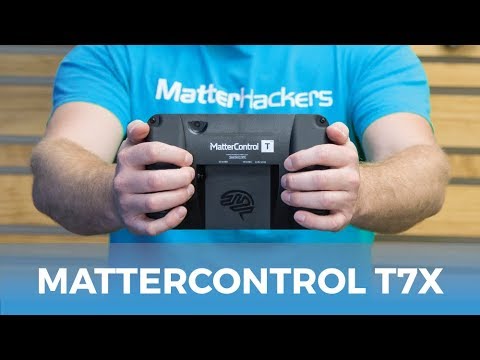 This also means you can support almost any 3D printer with the T7X, because the ability to generate GCODE for older machines, for example, could still take place outside of the T7X in the usual slicers.

For those with multiple – and different – 3D printers, it is possible to use the T7X with all of them by simply moving attaching the T7X to the next device and selecting the appropriate machine profile for file preparation. Note though, that this machine works essentially with filament extrusion equipment only, although for some reason they support one SLA 3D printer, the Peopoly Moai. Perhaps they will add more SLA machines in the future?

One very interesting feature is an on board embedded camera, unlike many other set-top boxes that require an external camera. However, this likely means you will have to place the device in a position suitable for capturing the print action. Evidently the camera takes a still image once per minute to update status, but does not yet capture time-lapse videos, which might be something they could easily add in the future.

The “Cloud Library” is interesting because it allows you to hold STL files as well as previously sliced GCODE files in the cloud. You can also access a library of 3D objects suitable for 3D printing directly from the device, if that is of interest.

Unlike some other set-top box systems, the T7X does not require an ongoing subscription fee for use of the cloud system; you pay only for the device itself.

Another concern is the one-time cost, at least for some people who might be able to build their own set top box with open source software and electronic parts. While the guts of such a homemade system would likely be based on something like a Raspberry Pi Zero W, which costs around USD$30, you still need a case, screen, camera, cables, power supply and the know-how to get that going. For anyone else, buying the entire package could save a lot of time – and the T7X unit is very attractive, too.

These Cargo Stoppers Are Bookends For the Junk in Your Trunk