The APSX SPYDER is a CNC milling machine which cuts metals, plastic, and wood while using a liquid-cooling system to keep it chill under pressure. It runs on a configured LinuxCNC and has an embedded PC, keyboard, pendant, and monitor – all of which are powered via a standard wall outlet plug.

For the machine parts, the SPYDER includes steel shafts, anodized aluminum blocks, stepper motors, and precision lead screws. Aside from making it difficult to carry and assemble, these parts make the machine more sturdy and rigid – traits you’d want a CNC machine to have for high-precision milling. 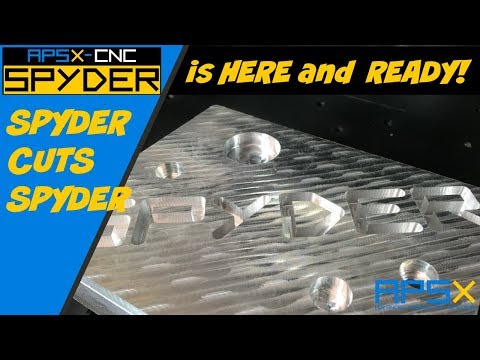 The milling spindle itself is liquid-chilled and spins at a range of 2,000-20,000 RPM. To prevent the RPM from going too low (resulting in a less-than-perfect cut) or too high (which ends up damaging the spindle), G-Code programming is used to control the spindle’s RPM and keep it constant.

Another important feature keeping the APSX Spyder from overheating like a polar bear in Hawaii is the water-air mixing system, which cools the workpiece and the end mill. Unless machining metals are cooled, they tend to become harder and flake off aluminum as their temperature increases. This results in the aluminum chips gumming up the works and renders the CNC machine less than proficient. The water-air system allows for pressurized air to remove these bits of aluminum before any permanent damage is done.

Lastly, the SPYDER is also able to detect if the spindle is cutting too aggressively or is not applied with enough coolant and stops the spindle in its tracks to avoid taking damage. It then keeps your XYZ coordinates in memory so once the problem is fixed, you can continue milling on as if nothing was amiss—similar to how a 3D printer will pause for a user to reload material if it runs out during a print job.

It usually costs $5,000 for one of these machines, but the APSX Spyder is currently on sale for $3,500 until September 1, 2018. See the full specs and features on the APSX webpage to see if it’s worth the investment.