Baseball: the good-old American pastime (apart from mowing the lawn on Sundays, that is). Contrary to popular belief, the earliest known recorded publication of baseball was found in England all the way back in 1744 and was brought to Canada by the English, which eventually made its way to America. Now there’s your history lesson for the day.

Over the course of its long history, baseball has been mostly played with hand gloves and wooden (or metal) bats. And while there’s no replacing the classic way of playing it, I always thought the sport could use a bit of innovation and creativity to make it more enjoyable.

For instance, why not add some gas cartridges to the end of your bat to give your swings some extra power? This is exactly what YouTuber The Q did in one of his recent videos: 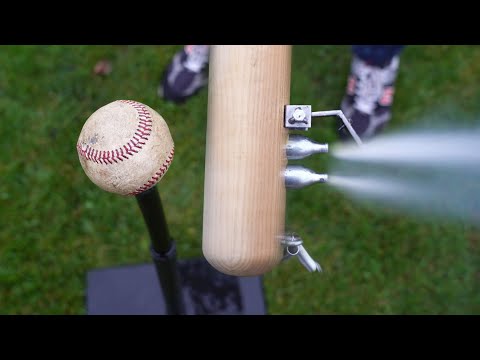 By fitting a standard baseball bat with CO2 cartridges, The Q hopes to hit home runs that are just as good as the major league players.

Drilling Holes Into The Baseball Bat

Time For Some Metal Work

To pop the cartridges whilst holding the bat, The Q has to make a special mechanism that allows him to puncture both CO2 canisters without having to adjust his batting form. In order to do so, he cuts out and welds two special pieces: a hinge and a metal piece with two sharp points.

He screws the hinge into the indent near the two big holes and attaches the metal piece on top of it.

Add Some Springs and String

With the core of the mechanism in place, all he needs now are the connectors. The Q drills hooks into the two smaller holes at the tip of the bat and has affixed them with springs. On the other end, he adds another hook and uses it to hold the mechanism in place. Lastly, a piece of string connecting the lower hook to a switch at the handle of the bat sets of the whole thing.

Here’s how it works: by releasing the switch at the bat’s handle, the tension in the mechanism pulls back the metal piece with the pointy ends. These points then puncture the CO2 canisters, thereby giving the batter some extra air pressure behind his swings.

But will it work? Let’s find out!

Coming Up To Bat

With his modified baseball bat, The Q steps up to the plate. He pops the CO2 canisters on his bat and…

… Well, it works, at least! It might be the batter’s unconscious resistance to the air pressure or the inadequacy of the pressure in the canisters, but this method surely won’t send your baseballs out of the ballpark. It isn’t cost-effective neither, as you’ll have to swap out canisters once the air in the cartridges runs out (I doubt anyone would even let you play baseball with this contraption strapped to your bat).

It is a nice idea though, and The Q still has managed to hit all the baseballs with his modified bat.

If you want to see more of The Q’s awesome DIY content, check out his YouTube channel.