In one of his many stop motion videos, YouTuber Tomosteen utilizes every color of dice imaginable as well as a bunch of other items to create a pork cutlet that is out of this world: 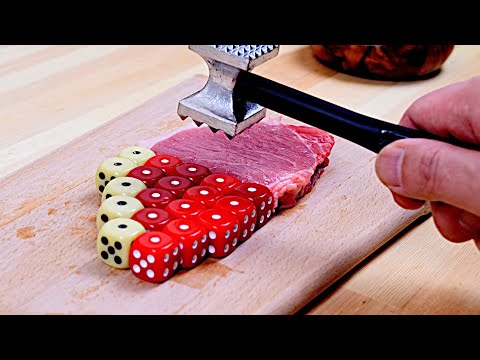 Much like fellow YouTuber Bebop’s LEGO culinary creations, Tomosteen makes his stop motion videos in such a way that the events flow into one another; thereby making them feel like they are happening in real time. Starting with the butchering of the toy pig to the tiny drop of “blood” which shows up on the paper towel, there’s intricate attention to each detail if you would take the time studying each frame.

Ever Seen Such A Realistic Fake Pork Chop?

The main attraction has got to be the pork chop. As he tenderizes the piece of pork, Tomosteen alternates between using a real pork chop and his own dice creation. You don’t even notice how he cuts and removes a piece of the real pork between shots and replaces it with layers of dice unless you watch the video in slow motion!

Tomosteen uses varying shades of red to denote the different parts of the meat where the blood is denser. He even goes the extra mile and adds a couple of white dice on one of the edges to mimic the fatty layer on the outer side of the pork chop.

While he leaves the pork to rest, Tomosteen works on the other ingredients of his cutlet.

He uses a mixture of real flour on his hands and some cotton to mimic flour, pieces of cut yellow and white paper which serve as the egg yolk and egg white respectively. Last but definitely not least, he enlists the aid of a real baguette to produce some “breading” made out of small, white shells.

Get Ready To Fry This Fake Cutlet

With his “ingredients” ready, Tomosteen can now prepare his pork cutlet for frying.

He dips his red and white pork chop into the flour, whereupon the dice turn white and powdery. Once finished, he dips it into his egg mixture where the pork turns yellow before adding it to his shell breading, where he coats it evenly in a nice layer of shells.

Tomosteen can now add his readied pork cutlet into his preheated frying pan, which contains a good amount of “cooking oil” comprised of translucent yellow and white dice.

Don’t Forget The Side Dishes

You can’t eat a piece of meat all on its own, so Tomosteen chops up a bunch of cabbage which turns into green dice upon being separated from the head. He also prepares some rice to go with the cutlet, which is easily done by adding a bunch of normal white dice into a small bowl. Lastly, he prepares some soy sauce in a dish by adding in a couple of black dice.

Set It All Up And Enjoy!

After the cutlet has turned into a nice golden brown, Tomosteen removes it from the pan and cuts it up into nice, edible pieces. You can see how the shells and the dice inside have also changed color, meaning the pork has been properly cooked both inside and out.

Finally, he sets his meal on the table: a nice, fried piece of “pork”, some green “lettuce”, a bowl of “rice”, and some “soy sauce” to go with it. I haven’t used so many scare quotes in a single article before, but man, does that fake pork cutlet look good enough to eat!

Tomosteen makes many more stop motion cooking videos using a variety of inedible objects. If you’re hankering for some good stop motion animation or are just in the mood to watch mouth-watering food videos, be sure to check out his YouTube channel.

Can Chainmail Made From Poptabs Protect You In A Swordfight?