Back in 2019, MythBusters host, special effects designer, and all-around crazy creator Adam Savage released a book titled Every Tool’s a Hammer. Chronicling his career as a creator, it takes a deep dive into Savage’s creative process and how he approaches crafting… well, I mean anything.

While I’m sure creators will get a kick out of reading the book, Peter Brown thought it would be fun to take the book’s title literally and turn Savage’s biography into an actual hammer: 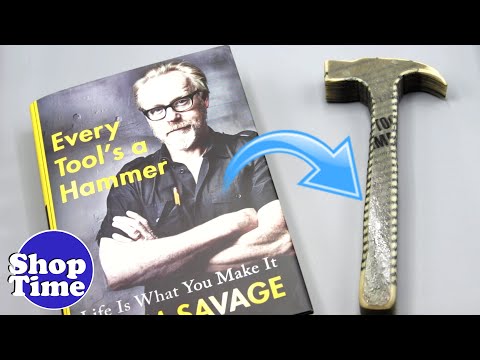 I actually thought he would use the hard book covers as a way to help make the hammer sturdier but no: Brown insists on doing this the old-fashioned way. He cuts out the book covers as well as the first page of the book before taking his brush and laying art resin on each and every one of the 310 pages.

This is probably the longest, most grueling way you could cover anything in resin but according to Brown, it is also the surest way to get the entire book completely rock solid. You can see his mental state start to deteriorate throughout the process. What starts as a per-page brushing becomes a per 2-3 page brushing, with Brown hoping the resin seeps through the pages as he goes along.

He runs out of resin at around the 183-page mark, so he mixes another batch and decides to change his plan of attack. Brown abandons the brushes and instead resorts to pouring the resin between a few pages and spreading it using his gloved hands. This is nowhere close to his original idea of painting resin on each and every page, but the casting process is starting to give him carpal tunnel syndrome (so he has to contend with this alternative method).

Eventually, he finishes casting the whole thing in resin and leaves the book to dry before cutting it into the shape of a hammer.

Once the resin dries, he stumbles into a new obstacle: the book is now way too hard for some of his tools to cut through it. His CNC machine fails him, so Brown has to cast a whole ‘nother Adam Savage book in art resin before he can attempt to make a new hammer.

This time, he takes his scroll saw to the resin book and cuts out a hammer pattern. Unlike his CNC machine, Brown’s scroll saw relies heavily on his hand-eye coordination to cut out the pattern. It’s also slow, time-consuming, and just by looking at it, is also very rickety.

After cutting out the hammer, he takes it to the sander and router table to smoothen out the edges and make it look just a tiny bit more professional. Elsewhere, he epoxies the excess parts of the book back into the covers to make a nice little storage container for his new hammer.

Et voilà, a book hammer made using Adam Savage’s Every Tool’s a Hammer. This thing is way harder and heavier than it was before, making it ideal for pounding nails and other objects into place. It would have been cool if Brown fleshed out the claw portion of the hammer so you could remove nails with it but making a hammer out of paper is tough enough as it is.

While I didn’t intend for the title to be taken literally, I am delighted that it was. Well done, @kludge1977! https://t.co/ux7f8kDUA9 #EveryToolsAHammer

It’s nice to know even Adam Savage himself was proud that someone took his book title so literally. It just goes to show that madness always appreciates madness!

The Best Leaf Mulchers for Your Lawn This 2021