Tons of creative X-Men fans have made Wolverine claws that can cut through pretty much anything. Nonetheless, only a few of those folks can brag a pair that actually draws and retracts. Just as a refresher, in addition to Wolverine’s advanced healing factor (his actual mutant power), he has a solid adamantium skeleton complete with three retractable claws on each hand.

Makers worldwide have put their own spin on creating these indestructible claws, but Brian from Brains techKnowlogy is one of the few I’ve seen who has made a retractable version of the same claws on a budget: 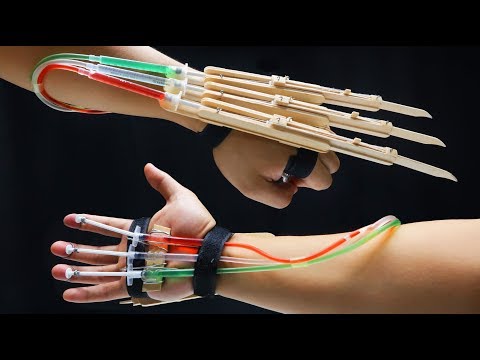 Using popsicle sticks, metal wire, syringes, and some tubing, his claws can be made just by anyone. The reason? No metalworking required.

While not as indestructible as metal claws, these wooden claws serve as perfect alternatives. They’re lighter, more malleable, and can still cut through a water balloon or two.

Brian glues several sticks around the single, protruding claw. To get the claws to draw, he makes two wooden housings: a bigger one housing another per claw. On the other hand, a few wooden stoppers glued on top of the housings will keep the claws in a prime cutting position.

Finally, he adds a couple of small hooks fitted with twine so the claws can retract once the syringe is depressurized.

Getting the claws to draw and retract requires the aid of a few syringes. Each claw has a syringe placed under it, so when Brian puts pressure on them, they push the claws forward.

Each syringe will be connected to another syringe located just underneath Brian’s hand. He adds some metal wire rings to the tips of the plungers so when he pulls on them, they will draw the claws on the other side of his hand.

Does Wolverine Have Green Blood?

Connecting the underhand syringes to the claws are plastic tubes. Before fitting the tubes, Brian first fills the syringes with green, red, and clear colored water (at least I hope it’s water) to get the pressure flowing. He does this since the air pressure inside the tubes might not be enough to push the claws forward.

Once filled, he fits in the tubes and prepares to get his sknit on. (That’s the sound Wolverine’s claws make in the comics, in case you didn’t know!)

Fitting On The Claws

Each of the overhand syringes is glued onto a couple of giant popsicle sticks and fitted with Velcro, so Brian can fit them onto his hand. Likewise, the underhand syringes are also glued to a single giant popsicle stick and fitted with a couple of hooks that latch onto the Velcro strap I mentioned. It’s a simple arrangement, but you have to admit it all fits very nicely together.

It won’t cut through everything, but the way these claws draw and retract are just so cool. Brian pops a couple of water balloons with no problem and adds some kickass sound effects to make the claws sound like the real deal.

You can check out more of Brian’s creations and experiments on his YouTube channel, Brains tehKnowlogy.