Ah, baseball: one of America’s favorite pastimes. While it is fun tossing the ball of the same namesake around, what really gets the crowd cheering is when someone hits the said ball with a good, solid bat.

Though Major League Baseball requires the use of wood bats, lower levels have allowed the aluminum bats to rise in popularity. They’re cheaper, lighter, and have a wider barrel – resulting in faster hits with more frequency. 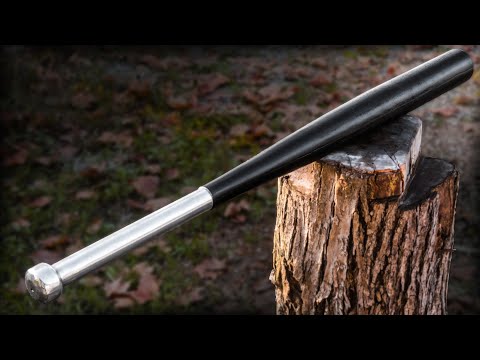 But those aluminum bats are hollow. The bat made by Black Beard Projects is solid and is more suited for bludgeoning fruit than hitting a baseball.

Start With a Wooden Bat

Believe it or not, casting a solid aluminum baseball bat requires you to make a wooden bat first! Black Beard Projects glued two similar planks together and placed a thin sheet of newspaper in between. The newspaper would make it easier to split the bat once it’s carved. Before he can do that, however, he used some clamps to hold the wood together in place.

In his project, making the wooden bat was just a matter of taking the glued wood to the lathe and shaping it. As the wood started to get more cylindrical, clamps had to be added to either end to prevent the planks from splitting.

It’s mesmerizing to watch the wood ends with different diameters merge in the middle. Once the final shape of the bat had been carved out, the clamps were removed and the two wood pieces were split apart with a chisel.

Black Beard Projects lightly dusted the bat halves with talc powder before placing them inside his wooden molds. He then poured Petrobond sand (special oil-bonded sand used for metal casting) over the bat and hammered it in to make the pattern for the cast.

Casting and Shaping the Aluminum Bat

Once the mold had set in, he removed the wooden bat inside and poured in the molten aluminum.

Just like with any cast, the hardened metal still had to be shaped down into the finished product. It was taken to a metal cutting band saw, where the infeed, outfeed, and excess metal jutting out of the bat were cut.

To make the grip more secure, the handle was smoothened out on a metal lathe. Finally, the whole thing was sanded down with some 400-grit sandpaper.

With the bat nearing completion, the only thing left to do was to polish it.

To give the bat some character, Black Beard Projects thought it would be a good idea to apply some black spray paint on the barrel.

Black Beard Projects effortlessly crushed various blocks of wood with his new toy, so it wouldn’t be out of the question for him to smash an ordinary baseball into pieces.