At some point in our childhood, I’m sure all of us have dragged our toy cars across the wall. It makes perfect sense as a kid: why get on our knees and push cars across the floor when a wall works just as well?

Debashis Das of DD ElectroTech was reminded of this childhood pastime when his nephew did the exact same thing with his toy car. Surprised that no toy company is offering a wall-driving car, Debahis took it upon himself to make his own.

So what did he use? Magnets? Adhesives? 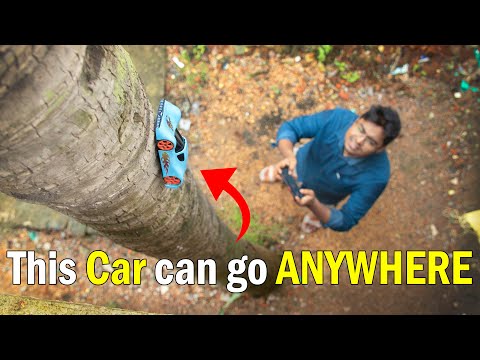 Nope. Turns out, all you need to get is a good suction mechanism.

Taking inspiration from household vacuum cleaners, Debashis figured the best way to make his project possible would be to create an air seal between the object and the surface it makes contact with. But seeing that there isn’t a prebuilt motor small enough for his project, he 3D printed his own.

His first custom motor (comprised of a turbine, a base, and a 3.7-volt battery) had enough suction to keep itself sticking to walls for a long time without overheating. But can it also bear the weight of the toy car?

So Debashis added a tray to his suction motor and began adding weights. As it turned out, the maximum weight his 3D-printed motor can carry while sticking to surfaces was only 65 grams. That was where the real challenge started. Debashis had to create the car components that would fit the said weight limit. Some of them were the car housing, four wheels and their motors, and the electronic modules where all the programming can be stored.

Working on the Prototypes

The housing and frame weren’t too much trouble for Debashis. Using lightweight material filaments in his 3D printer, he immediately started printing the outer shell of his car.

This left him ample time to work on the electronics. After making a sample circuit and using some wheels and motors, he created an Android app that allowed him to control everything from his phone.

The app worked as intended but upon testing the custom suction motor with the car parts, he found the first car prototype was too heavy.

This prompted Debashis to go back to the drawing board and shave weight off of the parts.

He reduced the weight of the electronics by creating a circuit using Altium Designer. He made sure to include only the necessary components and to use their SMD (surface-mount device) versions which will further reduce the weight.

When the printed circuit board was ready, Debashis applied solder paste on the PCB and attached all the parts. Compared to the first circuit which clocked in at 27 grams, the new circuit board only weighs 6 grams – leaving enough weight for the wheels, motors, and frame.

Seeing as the electronics became much lighter, the rest of the car had to follow suit.

Last but definitely not least, he 3D printed the top frame of the car which involved a lot of sanding procedures afterward. He first started with 100-grit, before moving to 220-grit, 400-grit, 600-grit, and finally 1,000-grit sandpaper. In between the sandings, Debashis applied water, primer, and paint to make the car look as sleek as possible.

With all the parts in place, the only thing left to do for Debashis was to upload the driving program and assemble it all together.

The finished car has two modes – Driving and Wall mode. The standard Driving mode is simple: you just push any of the directional buttons on the app and the car will move. Wall mode is a little more complicated (at least for the car’s electronics).

While the controls in the Wall mode are the same as those in Driving mode, the former activates the suction motor at the bottom of the toy. This creates a very loud, vacuum-like noise which signifies that the motor is doing its job. Apparently, you can also know it works if the car sticks onto a surface.

While climbing up walls is a bit of a challenge, the wall-driving car definitely works. The motor even has enough power which allows the car to drive on ceilings! If you don’t mind the annoying whir of the suction motor, this car will entertain you whilst you relax on your chair or bed.

For easier, do-it-yourself electronics projects such as this one, you can check out Debashis Das’s Youtube channel, DD ElectroTech.

Fold Your Luggage Down To Side With the LITO Suitcase

How Does Faber-Castell Make Its Highlighters?