Some might say that 3D printers are just for printing things. Well, Steven from 3D Printer Academy found another use for his own unit: simulating an actual earthquake.

Using the ground motion data of the 6.7 magnitude Northridge earthquake which occurred on January 17, 1994 in the San Fernando Valley region of Los Angeles, he was able to recreate the exact motions of the quake on his 3D printer. 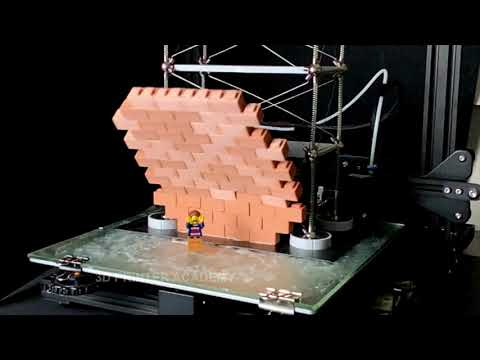 Of course, it wouldn’t be a proper earthquake simulation without any damage. So to help with his mini-quake demonstration, he employed the use of some magnetic supports, a couple of 3D printed platforms and bricks, and a single LEGO mini-figure.

His earthquake tests mostly revolved around two structures: one using a moment-frame design and another using a braced-frame design:

The moment-frame structure relies on the strength of its rigid beams and columns to keep it steady during an earthquake. While strong on its own, modern structures which employ this sort of design use building rollers set below them to offset the movements of the earthquake. This results in a building that has little to no movement at all.

Braced frames are just as sturdy. This is due to the fact that the beams and columns in the building are held together by cross members which prevent lateral movement. While it never hurts to have rollers underneath braced-frame structures, they can withstand strong natural calamities like hurricanes and earthquakes even without them.

Some structures with parking lots in their basements do not have proper reinforcement, so while the floors above them are rigid, the base floor isn’t. Steven explained that reinforcing the lower levels will ensure that the building won’t collapse on itself; keeping everyone in said building alive.

What About Unreinforced Bricks?

As an added bonus, Steven described how unreinforced masonry structures like those made from bricks can be hazardous during an earthquake. Without proper metal or steel holding them together, these structures will easily crumble and fall on anything in their immediate vicinity. The solution? Reinforce them with rebars or some sort of metal!

That’s a lot of information made easy to understand; thanks to the use of ground motion data, some simple 3D printed objects, and a couple of knickknacks. Steven has a lot of informative and experimental videos like these which utilize 3D printing, all of which can be found on his YouTube channel, 3D Printer Academy.