Repurposing old materials and using them to create something new—also known as Upcycling— is a great idea. Rather than throwing out those used materials, they can be utilized for many ingenious projects if you’re willing to stretch that creative muscle enough. Many upcycled projects have to deal with reclaimed wood—such as using an old barn door to build a kitchen table or using old wood flooring to make unique shelving. As strange as it might sound, old skateboard decks can also be repurposed for creative projects, which is exactly what Mike Clifford of Modustrial Maker used to design his Bluetooth Boombox.

Mike created the Boombox using twice-recycled skateboard wood for his build—utilizing offcuts of stacked skateboard plywood from a business that specializes in making furniture out of used skateboard decks. Similar to how one may approach making a cutting board out of scrap lumber, Mike squared-up his reclaimed pieces and glued them together to make the front panel of the Boombox while using MDF for the rest of the enclosure. 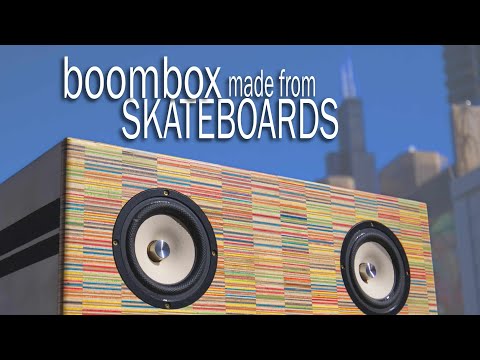 Mounted inside the box is a pair of Tang Band 5-inch drivers wired to a Dayton Audio KAB-250A amplifier board. This provides 2 X 50-watts of power per-channel and built-in Wi-Fi via Bluetooth 4.0. The board and speakers are powered a Dayton Audio KAB-BE extension board equipped with 2600mAh batteries (for going mobile) and a 9V power supply (for recharging). For the most part, every board here is plug-and-play friendly, so wiring up the hardware shouldn’t be an issue.

The controls of the Boombox are located on the back connected to an acrylic panel. They include a volume knob, on/off switch, 9V power and a headphone jack for silent listening. As for the outward aesthetics, Mike used the hardware from a defunct skateboard, using the trucks for an easy-carry handle and sanded-down wheels for feet.

The Bluetooth Powered Boombox is a creative way to recycle old wood—skateboard or not. Nonetheless, It’s always interesting to see what people can create with any used materials that most people wouldn’t think twice about tossing into the trash. Also—who would have ever thought that skateboards look killer as a portable stereo system worthy of taking to the vert park?

Model of the Week: Half-Penny Skateboard [SK8 or DIE!]