Print Your Own Invisible Ink Designs On Fake Money

You might not notice it because of how fast it leaves your hands, but paper bills have some neat tricks up their sleeves.

Everyone knows about serial numbers and security ribbons, but did you know certain national banknotes (US Dollars included) have a layer of invisible ink that makes them even harder to counterfeit? That’s right! Just pop a dollar bill under a UV light and watch parts of it glow!

Some banknotes have invisible ink designs which are flashier than others. The 100 Brazilian Real note, for example, has a numeric “100” printed on its left-hand side. Another one is the 5,000 Hungarian Forint note that has a very elaborate system of cogs running down the middle in addition to the numeric “5,000” invisible ink print. Regardless of their complexity and unique designs, these invisible ink prints all serve the same purpose: to authenticate the bills as real money.

Sadly, not all banknotes have the same amount of creativity put into them. The US$100 bill for instance, only has a slim bar that runs down the length of the bill. Compare that to the Hungarian Forint and you can see which country’s treasury has more free time on its hands. 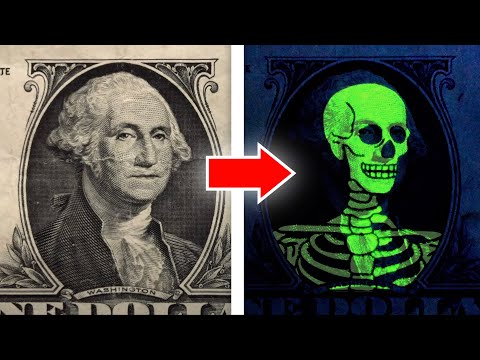 Eager to put some pizzazz into some boring bills, Christopher Burton (who goes by his online moniker “Half-Asleep Chris”) decided to spend a lot of money on a new printer and some very expensive invisible ink to print his own designs onto some paper bills. Of course, defacing real money is illegal; so Chris tried to find a way to print his designs on a fake paper bill.

The bodies of real banknotes do not glow under UV light. This is just another security feature countries have put in to make counterfeiting the bills more difficult. And this was one of the biggest problems Chris had to face since most types of ordinary paper glow brightly under UV light.

To combat this, Chris searched high and low for alternatives – eventually settling for some Nepalese Lokta paper made all the way from the bottom of Mt. Everest. This particular paper doesn’t glow, making it the perfect canvas for Chris’s totally legal money printing project.

But is it really safe to print and design your own money… even just for fun? Some countries do allow you to print fake money, provided you adhere to certain rules and regulations. After looking through these things carefully, Chris came up with the design of his own play money. It seemed to resemble the original bills but for compliance purposes, Chris had to accentuate its fake features.

Armed with his legally abiding fake bills, he turned on his printer and got to work. Printing with invisible ink is a gamble since it is not just like printing any typical document with visible marks afterward. The only way to check its success is to take it out of the printer, turn off the lights, and shine a UV light on it.

Wow. Seeing Queen Elizabeth II burn down the Eiffel Tower with her eyes is something you would never see on a British 5 Pound note and yet, I still kind of want it to be made official. Normally you would get imprisoned for doing this to a real banknote but thankfully, Chris only defaced his own cartoon play money for this.

Wanting to put some cosmos onto the US Dollar, Chris filled up the empty space on his cartoon US$20 bill with a spaceman, moon, and various heavenly bodies.

By far, the most complex print Chris has made is the lifelike image of Steve Irwin beside his cartoon drawing of Queen Elisabeth II. I’m pretty sure he just got an image off of the internet, but seeing the jolly Aussie get represented on a bill is something I’m sure people would appreciate.

Provided you can get your hands on some Lokta paper and invisible ink, you too could try your hand at spoofing money. Just make sure you aren’t breaking any counterfeit laws while doing so!

Best DSLR for Video Projects This 2021