If you’re tired of conventional magnets doing little more than sticking like parasites to your refrigerator, you might want to consider making your own.

That’s what YouTube creator BrainfooTV did. After years of decorating his refrigerator with half-broken alphabet letters, he decided to create something a bit more practical for the kitchen. 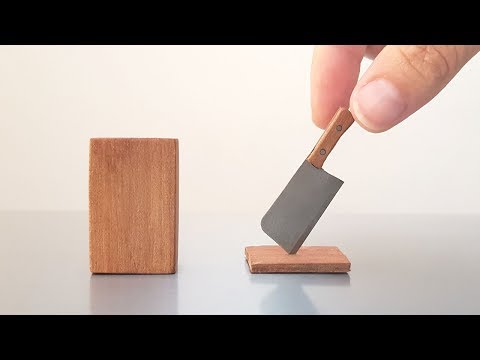 This mini meat cleaver may be the size of a thumb, but it is every bit as functional as its culinary big brother. The process in making one is exactly the same as a normal sized cleaver; albeit scaled down to tinier proportions.

Using a small printout of a cleaver as the basis for the build, Brainfoo cuts a Stanley blade and fits it into the shape of the knife. He extends the metal of the blade for it to fit inside the handle.

With the same printout, he traces two outlines for the handle onto a piece of wood. After cutting them out and gluing them together to the Stanley blade with some power Epoxy, the general cleaver is almost done.

Glue won’t be enough to stop the blade from escaping the handle and harming some unfortunate person, however. This is why Brainfoo cuts some nails and fits them in holes drilled into the handle of the cleaver. Some filing down and a mixture of mineral oil and nail varnish give this rather cute culinary tool a professional look.

The last part of this tiny build is a fridge magnet protector for the blade. Brainfoo cuts a sheathe onto a small block of wood and leaves just enough space for a magnet to be inserted. He also makes a small groove which serves as a guide for when he drills a hole for the magnet to fit into.

Gluing this block of wood to another, he drills the aforementioned hole and slides the magnet into place. Using some adhesive, the magnet becomes a permanent part of the sheathe.

All that’s left to do is give it some polish and voila, you now have a magnet which can cut up vegetables, to-do lists, and body hair (though you should probably wash the blade before and afterwards). The best thing about this blade is it can be placed where you need it most: on your fridge.

If you want to create this cutting-edge (literally) magnet, a step-by-step process can be found on Brainfoo’s website. You can find more of his creations here as well as on his YouTube channel.