Have you ever wondered what happens to spent bullet casings?

I bet no one would dare pick up bullet casings in the middle of a battlefield in fear of getting shot. In controlled environments like a firing range, however, you can do it. There, the collected empty casings are sold as scrap or reloaded into new bullets.

The person behind the HotMetal YouTube channel just happened to have a lot of empty bullet casings lying around. Instead of selling them off as scrap so they could be made into something more useful, he decided the best way to get rid of these old bullets was by remaking them into one giant, custom… bullet! 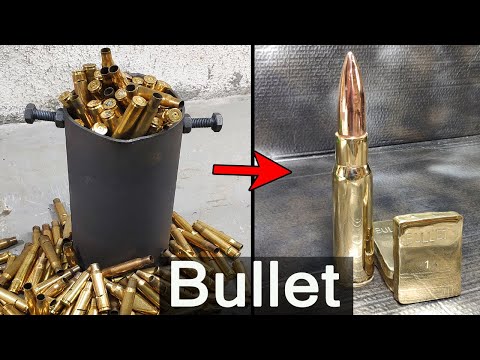 To be clear, it’s only the cartridge that is made from bullet casings. The actual bullet is made from melted down copper found in pieces of scrap scattered around the workshop.

While the scrap copper and brass were being heated in the smelter, HotMetal got a custom sand mold ready.

Unlike most resin casts, sand casting requires holes to allow hot liquid to be poured inside. This is done by adding small pieces of the pipe prior to the second sand pouring. Once the holes have been made and the mold is flattened, a single flask is removed. This exactly what HotMetal did to remove the plastic bullet and casing before preparing it for casting.

With the molds ready and the metal melted, it’s finally time to do some casting!

HotMetal poured err… hot metal into the molds. To be exact, he used liquid copper for the bullet and melted brass (courtesy of the spent bullet casings) for the cartridge. Since there was still a lot of molten brass leftover, he decided to cast a couple of extra ingots with it.

The thing with sand casting is that the molds don’t always come out the way you want them to. Excess metal seeps through the cracks and holes used for pouring the molten liquid.

HotMetal removed his new bullet and casing from the mold to cut and polish it up. He used a saw to cut off the excess metal from both the copper bullet and the brass casing. When this was finished, he took the casing to a friend’s lathe and had his buddy drill a hole for the bullet to fit through. The lathe also allowed him to add a dummy capsule on the bottom of the casing for some extra detail.

With the shape of the bullet and casing complete, the only things left to do were to polish and sand it.

I’m starting to see a trend where it seems anyone who does metalworks has a shelf in their home where they store all their projects. HotMetal is no different. He included his finished bullet and ingots proudly beside the other bullets and knick-knacks he’s made from years of melting metal.

All of these projects can be found on his YouTube channel, HotMetal.