We all know how a dishwasher works in the eyes of the kids. Dirty dishes go in, tiny cleaning elves work their magic, and clean dishes come out!

We, adults, however, know that dishwashers spray water with different levels of intensity at your dishes. Add in some detergent and heat to expel the bacteria and boom: your plates are ready to be dirtied once again.

It’s easy enough to understand this concept, but not many have actually seen the inside of a dishwasher as it goes about its daily routine. Not many cameras could withstand the extreme heat and weather conditions inside a dishwasher. That is… until now. 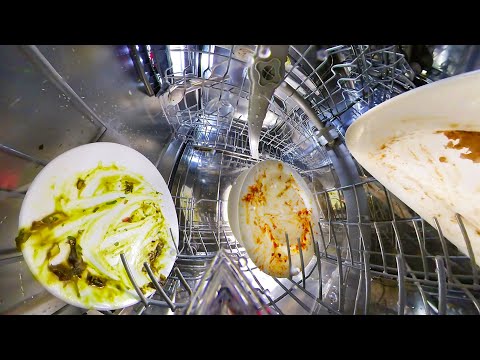 Matt Mikka of Warped Perception popped not one, but two cameras into his brand new dishwasher. The first camera happens to be a static GoPro while the second is a full 360° camera

To get an all-encompassing view of what it would be like for a couple of unfortunate ants on plates, he would use it to get a good view inside.

While both cameras can handle some pretty harsh environments out of the bag, Mikka added a little bit of extra protection by way of a couple of dive cases. In theory, these should keep water from seeping into the cameras’ electronics; effectively increasing their run time inside the dishwasher.

Mikka also created a couple of metal supports to keep them rooted. With the cameras in place, it’s time to add that detergent and power up the washer.

Much of the dishwasher’s routine involves spraying and emptying water inside it. It starts with light fountains of water from the top and bottom to get the dishes wet and remove food stains. To ensure all areas are evenly sprayed, a rotating blade near the top spreads the water throughout the washer.

Once the initial rinse is done, the water is drained and the actual wash cycle begins. This time, the water comes from all directions much faster and stronger. It is also during the wash cycle where the detergent gets dispensed into the dishwasher.

By that time, the inside of the dishwasher would be full of soapy and wet dishes. To remove the soap, a high-pressure wash is started. This is an even stronger water cycle that mixes in heat to get those hard-to-remove stains from your dishes.

In the video, you would notice some guacamole smears on one particular dish to be quite resilient. Those stains had stuck to the plate even throughout most of the high-pressure wash. But with enough heat and some high-power water jets, the dastardly villain soon gave in.

The water was drained and the dishes were rinsed once more. Any stain that survived up to this point was subjected to excessive amounts of heat for further sanitation of the dishes. One final rinse and drain and the dishwasher was opened by Mikka.

When he opened his dishwasher, Mikka took a look at both the external and internal temperatures of the machine. The outside of the dishwasher hit as high as 144°F (62°C) while the inside reached temperatures of up to 155°F (66°C).

Thankfully this was not enough to cook his two cameras. The dive case encasing the GoPro popped open, leaving the camera to the elements. A piece of the frame from the GoPro fell off as well after the plastic hinges melted from the high temperature. On the other hand, the 360° camera survived everything and managed to stay still inside the dive case.

So there you have it: inside footage of a dishwasher. To be honest, you could speed up the video perhaps by two or three times. After all, no one wants to watch entire long-hour footage of plates getting cleaned unless you’re extremely bored. Well, our guy Mikka took his boredom to another level. If you’re feeling like that at this moment, better check out his channel and watch some videos that will satisfy your curiosity!

Microsoft’s Xbox Mini-Fridge Is Turning Into a Reality Now