Perhaps you wouldn’t simply hand your young kid his or her own iPhone to play Fortnight all day every day, but would you stop them from having their own mobile phone if they had to learn how to build it from scratch? What about if they had to code their own apps? 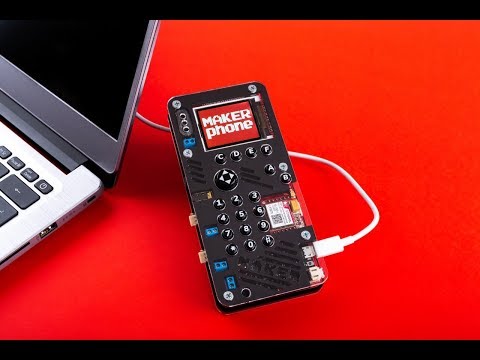 The MAKERphone may look like a bare-bones mobile phone, but it allows kids 11-years-old and upwards to make their own phones from scratch. This includes soldering the circuits, putting together the hardware pieces, and coding all the phone’s apps.

As you can guess, this ambitious project teaches users more than what is inside a phone. Among other things, the MAKERphone teaches basic electronics, programming, physical computing, and soldering.

Opening the MAKERphone box reveals not a finished product, but all the parts you’ll need to make your working phone.

You’ll need a soldering iron and screwdriver, but if you don’t happen to have these tools, there is a special version of the MAKERphone which includes all the tools you’ll need to complete the physical construction. Assembling the hardware is said to take about 7 hours—so plan a good chunk of a Saturday or Sunday to get it finished.

But assembling the hardware is just the start, as most of the work (or fun) comes with programming the MAKERphone yourself.

Using a specialized Python programming language called MicroPython, you can make your own apps which are designed to work with the MAKERphone. If the program seems to complex, the creators also included compatibility options with Whitecat IDE and Arduino. Once the apps are programmed, they can be stored into the MAKERphone’s stock 128MB SD card.

To help foster a tight-knit community, MAKERphone apps can be shared on CircuitMess, a crowd-sharing webpage where users can share, download, and talk about their passion programs.

Apart from personal apps and games, the MAKERphone does everything a low-end 21st century mobile phone should. It receives text messages, makes calls, plays music, and while you won’t be browsing the internet, playing Fortnight, or watching 1080p resolution videos on its tiny 128×160 LCD monitor.

Even if you (and likely, your kid) don’t have any prior experience with electronics or programming, assembling the phone is made in such a way like you’re completing levels in a video game. Starting with the hardware and electronics before moving onto apps and games, the MAKERphone gives you a step-by-step walkthrough of the basics before moving onto more complex tasks.

The MAKERphone Kickstarter project has already achieved its $15,000 goal (it currently has funding of $196,557). You can find more nitty-gritty details, such as the hardware specs, over on the Kickstarter page.